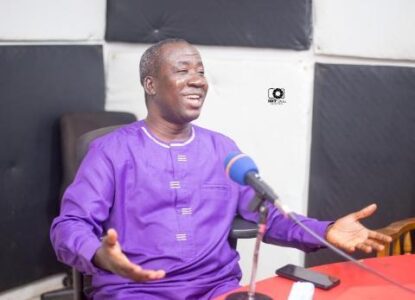 Wild rumours that Hon Yaw Danso, District Chief Executive for Bosome Freho Assembly in the Ashanti Region engaging in illegal mining has been described as untrue.

Intelligence gathered from the Bosome Freho District, by a team of journalists after storming some of the communities within the entire district established that, Hon DCE, Yaw Danso is not doing any illegal mining as purported by media houses.

Speaking to some residents of Daanso, Minti, Yapesa, Kokoben, Nsuaem No.2, Hantasi and Dompa they said they are not aware of DCE’s involvement in Galamsey and is never true he is “kingpin” in illegal mining.

Constituents has rubbished allegations leveled against Hon. Yaw Danso in a New Crusading Guide Newspaper publication and other online portals that he is involved in illegal mining (galamsay) activities in the area.

There were claims that Hon. Yaw Danso was seriously indulging himself in galamsey but in a sharp rebuttal, Hon. Yaw Danso has stated categorically that he has no hand in the illegal mining so the rumours is baseless.

Reacting to the allegations in an interview with Bryt FM’s Evans Boateng, Hon Yaw Danso said the publication in question was purported by his opponents eyeing the DCE position to tarnish his name as well as his integrity.

He said the people in the area can attest to his good works in terms of developmental projects undertaken in the last four years under his watch in the district.

”I don’t do Galamsey. Anyone who knows my involvement in galamsey should boldly come out and show me my concession in the area where I operate.

Hon. Yaw Danso has therefore implored all to ignore all publications in the media space which meant to destroy his hard-won reputation.