According to Hajia Bintu, a social media sensation, Hiplife artist and rapper Kofi Mole is a better rapper than Medikal, as she stated on her Twitter profile.

Medikal has been claiming to be Ghana’s top rapper for quite some time now. He has frequently posted pictures of his opulent lifestyle on social media, giving the appearance that he is wealthy.

With Criss Waddle, his “godfather,” he was even accused of being a phony. Kofi Mole, on the other hand, is a rising star who has a slew of hit singles under his belt.

It’s unclear why Hajia Bintu will draw a parallel between the two, given that they’re both excellent at what they do. 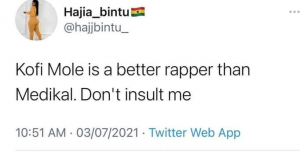