Bono Regional Chairman of the ruling New Patriotic Party (NPP), Kwame Baffoe alias Abronye DC has filed a lawsuit against the payment of salaries to First and Second Ladies in Ghana.

He is seeking inter alia a declaration that, the decision to pay emoluments to Presidential Spouses is inconsistent to the 1992 Constitution and that, same must be declared null and void.

Abronye DC, in a writ sighted by Mintah.net, has prayed the Supreme Court for a “declaration that, the approval by Parliament to pay salaries to the First and Second Ladies is inconsistent with ARTICLE 71 CLAUSES 1 AND 2 of the 1992 Constitution of the Republic of Ghana and consequently be declared null, void and unenforceable’’.

He also wants the court to order that, “per Articles 108 and 178 of the 1992 Constitution of the Republic of Ghana; parliament cannot, on its own accord, initiate or approve payment of any such emoluments; which would necessarily be paid from public funds; without a bill to that effect emanating from and introduced by the Government and dully passed into law’’. 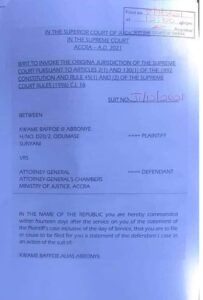 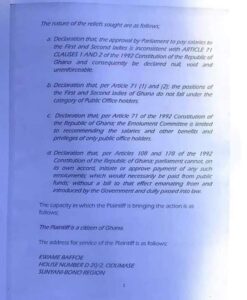 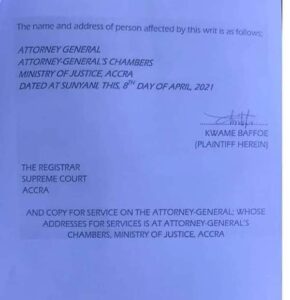