Actress Destiny Etiko has most times been seen living a life full of happiness in the videos she posts on her social media pages.

She seems to have everything at her disposal from the interesting roles she plays in movies. She’s seen in viral video kneeling and thanking the movie “godfather” Chief Pete Edochie for grooming and supporting her. 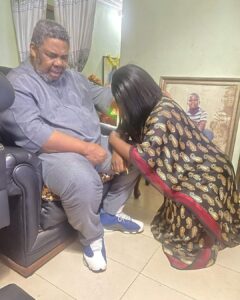 Pete Edochie is popularly known to be humble and a very great man in. He’s considered one of Africa’s most talented actors, being honored with an Industrial Merit Award by Africa magic and life time achievement by African Film Academy. He has been the “People’s choice” since coming into prominence in the 90’s.

Destiny on the other hand, joined the movie industry in 2011 and gained prominence after she featured in a movie titled “Idemili” in 2012. She has made so much over the years with her talent and modeling roles in the industry.

She took to her Facebook page in a video, hugging and thanking the movie legend for his prayer support in the industry and she further expressed how much love she’s got him for supporting her all the times in the industry.

Check Out The Lavish Lifestyle Of Ghanaian Player Thomas Partey