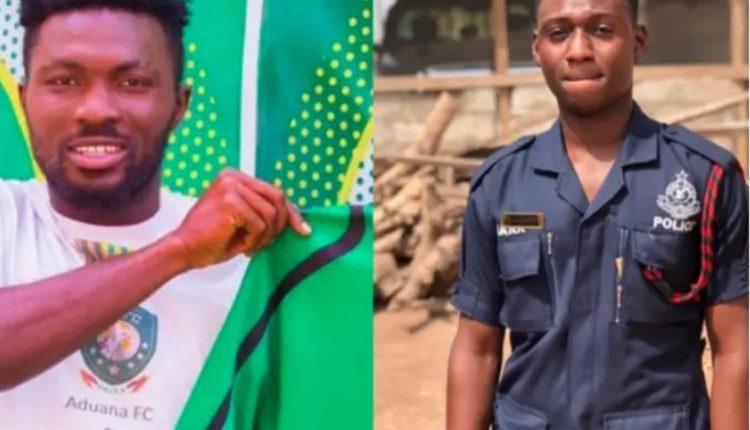 Aduana Stars defender Farouk Adams was arrested in Dormaa Ahenkro after he hit a police officer who had closed from a shift at Asuotiano – Berekum road with a car.

The Berekum Circuit court granted a Gh¢ 60,000 bail with four sureties to the Aduana Defender who knocked down the police officer.

Aduana Stars central defender Farouk Adams was immediately charged with four additional counts after he was already charged with two for allegedly killing a police officer upon his first appearance in court on 5 March 2021.

Careless and inconsiderate driving and negligently causing harm were the initial charges.

The additional charges were failing to report the accident to the police and failing to stop to attend to an accident victim.

Inspector Emmanuel Sampson, who presented the case to the Berekum circuit court on 5 March 2021, presided over by Osei Kofi Amoako said Adams was driving a Toyota Camry vehicle with registration number GW 5882-17 from Sunyani towards Dormaa-Ahenkro.

He said, the player at about 8 pm on Monday, March 1, 2021, knocked down an oncoming motorbike driven by Constable Amos Maatey Niganoka, now deceased, at a section of the road near Cocoa Station at Asuotiano in the Dormaa East district.

The prosecutor, Inspector Sampson told the court that Adams after the incident failed to stop and attend to the victim and sped off leaving the Constable there.

According to him, the suspect also failed to report the accident to the police but went and parked the accident vehicle at a Goil Filling Station and silently went to the Wamfie Polyclinic for treatment.

2024 elections: Bawumia is a gem and more than qualified to lead NPP – Ama Busia