The African Faith Tabernacle Church (A.F.T.C.) better known as Odiifo) Nkansah Asore has detached itself from defilement case, the church has affirmed that, the pastor in question is not part of the church.

In a statement signed by the church Public Relations Officer, Chief Pastor Jacob Kwesi Rockson stated that, African Faith Tabernacle Church does not have any branch/assembly at Nyinahin.

He added that, the man in question has seized to be a member and Pastor in the Church since 2008. 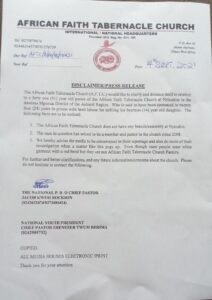 Chief Pastor Jacob Kwesi Rockson therefore advised the media to be circumspect in their reportage and also do more of their investigations when a matter like this pops up, he believes most people wear white garment with a red band who are not African Faith Tabernacle Church members lately. 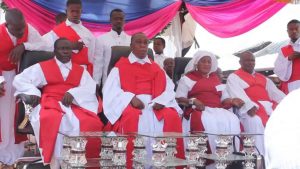 Background of the story

This was after he pleaded guilty to both charges.

The sentences are to run concurrently.

Kwame Nkansah believes to be a pastor of African Faith Tabernacle Church who doubles as a carpenter in December last year accused his daughter of breaking her virginity too early.

Although, the child denied her father’s accusation, he impressed upon her with intimidation to admit under duress.

Pastor Kwame Nkansah is reported to have had sex with his daughter on Monday, December 7, 2020 to exorcise her from an omen for engaging in early sex.

He subsequently warned his daughter not to inform anyone of his actions else she will die.

The suspect has since then continuously had sex with the girl till he was arrested after a tip-off on Wednesday, September 1.

The victim is currently in the care of a shelter in Kumasi preparing for her Basic Education Certificate Examination (BECE).