The President of the Republic, Nana Addo Dankwa Akufo-Addo, on Monday, 12th July 2021, commissioned the Salaga Water Supply Project, and a newly constructed Astroturf football pitch for residents of Salaga in the Savannah Region, as part of his 2-day tour of the Savannah Region. 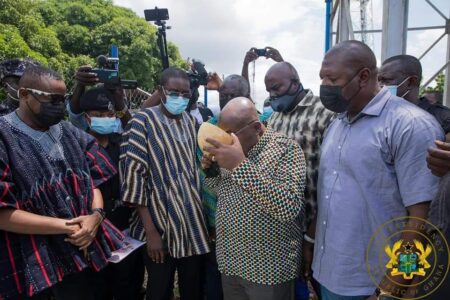 It will be recalled that during the President’s working visit to Salaga in 2017, he indicated, in his remarks, that demand for water in the town had outstripped supply, and directed the Ghana Water Company Ltd to transform the water supply in the town, which was constructed in 1962, from a rural water supply category into an urban water supply one.

The completion of the project, which cost some GH¢13,906,629, now means the Salaga water supply project has the capacity to supply some 20,000 gallons of water a day to residents.

The Salaga Water Project resulted in the rehabilitation of two (2) steel elevated tanks, the construction of twenty-one (21) standpipes, the provision of ten storage tanks in Salaga, Kpembi and Masaka, the rehabilitation of the existing water treatment plant structure, and the replacement of the old treated water transmission pipelines. 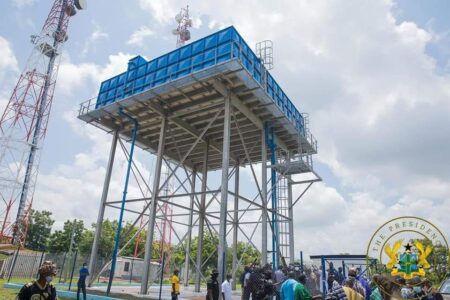 The Project also involved the renovation of two (2) quarters for staff of the Ghana Water Company Ltd in Salaga, as well as the provision of a new 100KVA transformer, and the installation of a new booster station to distribute water from the new concrete underground tank at ‘Nkwanta Junction’ to the new GRP tank at Kpembe.

President Akufo-Addo also commissioned the Salaga Astroturf football pitch, a project which was commenced in 2018 by the then Ministry of Inner City and Zongo Development.

Constructed at a cost of GH¢1.9 million, the purpose of the astroturf pitch in Salaga, like those constructed in Madina, Bolgatanga, Kyebi, Walewale, Bolgatanga, and Yeji, is to help promote sports and sports development in the Municipality, and help unearth sporting talents in the municipality.

The President admonished the youth to make good use of the facility, and called on the Muncipal Assembly to undertake routine maintenance of the pitch to ensure its longevity.

Upon completion, the road will help ensure connectivity between the Eastern and Western parts of the Savannah Region, without commuters having to use Tamale in the Northern Region, and also reduce travel distance between Damongo and Salaga by some 60-kilometres.
The project, which was started on 27th February 2020 and is expected to be completed on 25th August 2023, will help in the carting food stuffs from the Eastern part of the Savannah Region to the Western part, and to the Bono and Ahafo Regions.

According to the Contractor, M/S Mawums Limited, the project is currently 30% complete, and assured President Akufo-Addo that it will be completed on time.