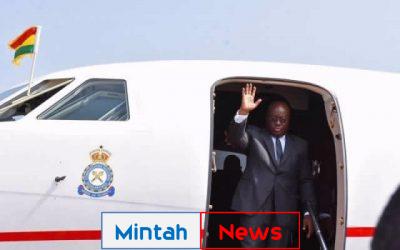 The president will be in Ivory Coast to witness the inauguration of President Alassane Ouattara who will be sworn into government again for his third term.

Alassane Ouattara won a third term with 94.27% of the vote.

On Tuesday, December 15, 2020, President Akufo-Addo will make a trip to the Republic of Guinea for the inauguration of President Alpha Condé as well.

The Guinean president has been in power since December 2010.

According to a statement from the Minister of Information, Kojo Oppong-Nkrumah, President Akufo-Addo will later journey to London before returning to Accra. The Minister did not state the president’s assignment in London and when he was expected to return.

The trip is part of the Ghanaian President’s duty as chairman of the Economic Community of West African States (ECOWAS).

In his absence, Ghana’s Vice President, Mahamudu Bawumia will act as the president of the country.