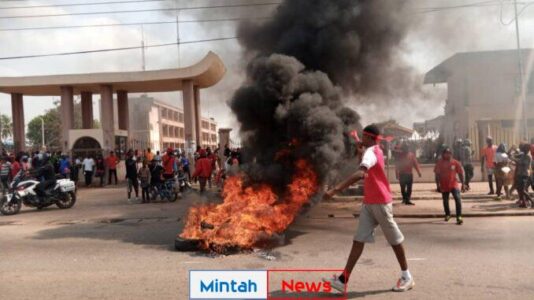 The NDC supporters including regional executives embarked on demonstration in Kumasi to exercise their displeasure against the outcome of the December 7 general elections.

Over 1000 NDC supporters wore red and black to protest against the Electoral Commission of Ghana (EC) boss Jean Mensah and President Akufo-Addo.

The supporters of NDC who couldn’t control their temper blocked the road to demand justice and change the outcome of the 2020 general elections.

“No Mahama no Peace. We will fight with our blood to see justice prevails. NDC and Mahama won the elections but EC boss Jean Mensah rigged in to favour Nana Akufo-Addo”they said.

“The police and the military can shoot us but it will stop us from fighting for justice. We need justice so those calling for peace should call for justice as well”.

Some of the NDC supporters attempted to attack police officers who joined the demonstration to provide security.
READ  NDC Uncovers Another Supposed Rigging Plot in Savannah Region

It took the intervention of the police and military personnel professionalism to calm down the situation.

Security has been beefed up at Kumasi Jubilee Park.