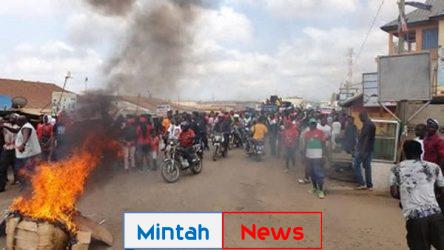 Hundreds of supporters of the National Democratic Congress (NDC) in Ashaiman yesterday embarked on a march to protest the outcome of the just ended elections which declared President Nana Akufo-Addo of the New Patriotic Party (NPP) the winner of the Presidential election.

Dubbed “Peace March”, the supporters, clad in red attires and arm bands displayed placards with inscriptions such as “stolen verdict”, “let my vote count”, “we need peace”, “declare the right results”, “respect the right of Ghanaians”, “declare Sene West Constituency now” among others, as they walked through various streets in the municipality.

They also played loud music including Bob Marley’s “get up, stand up” and shouted “we no go agree, no Mahama no peace, we want peace”.

The peaceful march was however nearly marred as some of the protestors started burning car tyres, making movement for road users a challenge.

However, the swift intervention by the Police and the Ghana National Fire Service brought the situation under control as the fires were extinguished and calm restored.