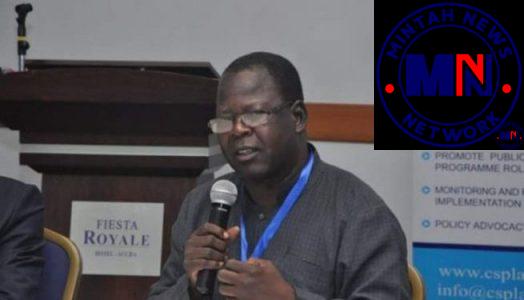 He says how the Board is moving with its processes for the notes is even difficult to comprehend.

“I don’t understand why the Audit Board is pursuing this because he [Domelevo] has told them that they are not the appointing authority. So the man has told you he doesn’t answer to you, so why are they worrying themselves? The point is that he handed over when he was going on his accumulated leave. He came back and the very day he came, he didn’t take over from the one who was acting, so what is he going to hand over? What is the problem? I don’t understand”, he told Umaru Sanda Amadu on Eyewitness News.

According to the former boss of the Ghana Integrity Initiative, it will be proper for Mr. Domelevo to ignore the request and desist from explaining any correspondence from the Board.

“Why did they wait for all this while before asking for comprehensive handover notes? I think that even Mr. Domelevo shouldn’t be responding to these letters if he is sure of his issues. He should only respond to letters from the Presidency and not the Board Chair”, he said.

As you may be aware, the Audit Service Board has asked immediate-past Auditor General, Daniel Domelevo to produce comprehensive handing over notes to be given to Johnson Akuamoah Asiedu, the acting Auditor General.

In a letter signed by the Board Chairman, Professor Dua Agyeman, Domelevo was asked to produce the report within two weeks.

But Domelevo, whose exit from office was characterized by serious controversy described the request as ‘preposterous.’

He responded to the Board of the Audit Service, Domelevo stating that in June 2020, he handed over his duties to the Deputy Auditor-General, Johnson Akuamoah Asiedu.

Mr. Azeem however asserts that the Audit Board is making a needless request that has the likelihood to expose possible infractions in the activities of the Service.

He thus advised the Board to allow cooler heads to prevail and backtrack on its decision as a means of bringing finality to the matter.

“For me, the last day was the day he was asked to go on leave and actions were taken a day after he started the leave. Can he hand over notes on those actions? Can we say that all this while, the service wasn’t working, or he should be responsible for actions that took place during those 167 days? I can’t understand.”

“I don’t think it will wise for the Audit Service Board to insist that the Acting Auditor-General prepare to hand over notes because this battle is going to continue because the handing over notes will even expose the Acting Auditor or Audit Service on issues they wouldn’t want out there. So it’s even in the interest to accept what Mr. Doemlevo has said and let the matter end”, he added.