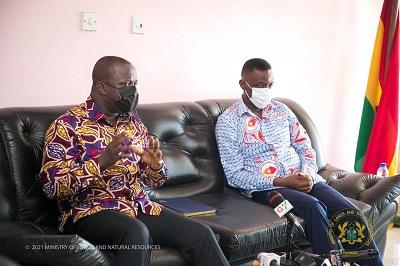 The Minister of Lands and Natural Resources, Samuel Abu Jinapor, has charged the Western Regional Security Council to deal decisively with persons engaging in illegal small scale mining and related activities in the region.

He said the Council was expected to intensify enforcement to stop illegal exploration of gold as it was the bedrock of most of the country’s natural resources, adding that it should ensure efficient management of the resources.

“The charge for us is to deal with illegal mining irrespective of the party affiliation or colour of the culprit. Whether it is NPP or NDC or any other grouping, the Council has the mandate to deal with such persons. No one is above the law in this country,” he stated.

The Minister said yesterday this at a meeting with the Western Regional Minister, Kwabena OkyereDarko-Mensah, in Takoradi as part of his two-day working visit to the region.

Mr Jinapor explained that although his outfit was in charge of the management of natural resources, security arrangement of the country required that regional security councils enforce the laws and regulations regarding mining.

The Minister further called for increased support in the fight against the menace and commended the Regional Minister for taking steps to seize 16 excavators and causing the arrest of about four persons for engaging in illegal mining.

In the coming days, he noted that the Ministry would provide a comprehensive update on seized excavators.

Mr Darko-Mensah pledged the Council’s renewed commitment to support the ongoing fight against illegal mining, adding, “We are ever ready to support you. We are committed now more than ever.”

He advocated the inclusion of all stakeholders such as chiefs and opinion leaders, in the fight and called for an effective mining licensing regime as part of the measures.

Earlier, Mr Jinapor had held a closed-door meeting with heads of the various security agencies in the region as well as agencies under the Ministry, including the Minerals Commission, Lands Commission and Forestry Commission.