The vice president of Ghana Dr Mahamadu Bawumia has for the first time reacted the news making rounds that he has a second wife who is known as Ramatu.

Dr Bawumia said in a press release that the stories around him in relation to Ramatu are all fabricated.

According to the head of Government’s economic team, he does not know anyone with the name Ramatu and has not married anyone known as Ramatu.

Few days ago at the state of the nation’s address in Accra, the minority created a dramatic scene as they chanted before the speaker of parliament that they want to see Ramatu Bawumia after the speaker introduced Samira Bawumia the wife of the vice president.

Apparently it has been alleged that Ramatu is a hidden wife of the vice president of Ghana after the speaker of parliament during the inauguration of president Nana Akuffo-Addo on January 7th 2021 introduced Samira Bawumia as Ramatu Bawumia.

READ BELOW A PRESS RELEASE FROM THE OFFICE OF DR BAWUMIA: 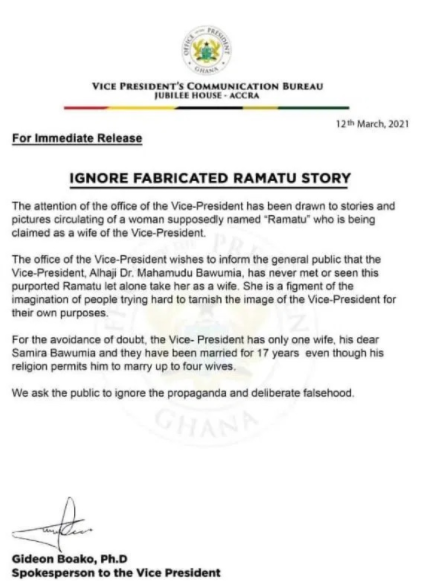