Mr. Enoch Asante-Bediako, a Ghanaian based in the US has debunked claims that the Akuapem North Municipal Chief Executive Officer, Hon. Barima Asiedu Larbi has given him three plots of land at Larteh junction to replace his 0.44 acres of land at Akropong.

Recently, the Akuapem North Municipal Assembly in Eastern Region was fingered in an attempt to claim ownership of private land belonging to Mr. Enoch Asante-Bediako who currently resides in US.

According to Mr. Enoch Asante-Bediako, after 21 years of ownership without any incident, the Akuapem North Municipal Assembly and Barima Asiedu-Larbi, (MCE)’s actions to allegedly encroach, destroy and claim ownership of his hard-earned property is misguided, unlawful, unjust and a danger to the fabric and essence of the rule of law.

When Koforidua based Bryt FM contacted the MCE, Hon. Barima Asiedu Larbi, he said there is no problem between Mr. Enoch Asante-Bediako and the Assembly.

He noted that they are done with the said issue, hence both parties have agreed to the land swap, and the Assembly has given him three plots of land that is 100/100 per plot at Larteh junction.

Mr. Enoch Asante-Bediako responding to the MCE’s claims revealed that the Assembly has not given him the said land as is being claimed by the MCE, hence the public should treat it as lies and the contempt it deserves.

“As far as I am concerned, the Assembly has not given me any land or documentation to prove that they have transferred the land to me, hence it is false for the MCE to assert that they have given me three plots of land to replace my 0.44 acres of land,” he said. 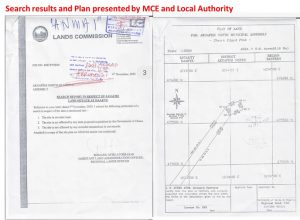 The above picture also shows the search results and plan presented by the MCE and the Akwapim North Municipal Assembly. 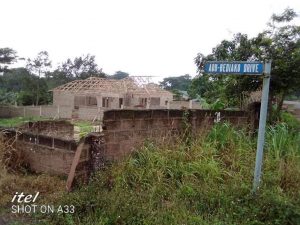 Mr. Enoch Asante-Bediako in responding to this statement said they failed to provide documents to prove that the land was given to them by the chiefs in the 1960’s, and there is no Deed of Gift as well to show; 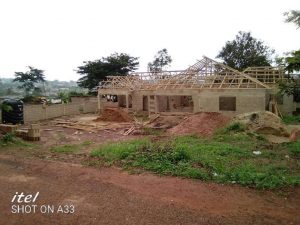 “I have not done any development on the land since I bought it. The only thing I did is the fence-wall, and even with that there was no interference from the Assembly. During the walling, no one approached me to stop it as is being claimed by the Assembly’s lawyer, Mr. Cyril Boateng Keteku,” Mr. Enoch Asante-Bediako stressed.

“Lately, the Assembly’s lawyer has failed to pick our lawyer’s call to reconsider our terms regarding the land swap.

“It is ridiculous if the Assembly’s lawyer says a random lawyer served him a letter on behalf of our substantive lawyer. At the last but one court hearing, Mr. Cyril Keteku can testify that our lawyer was seriously sick so an Associate lawyer from the same chamber replaced our substantive lawyer on his health grounds.

“I was requesting for GHS 50, 000 before accepting the land swap because my land is in a prime location.   There was farm produce on the land and the wall alone can cost approximately GH 20,000.00 to construct. It was a well thought through proposal to the Assembly, so if Mr. Cyril Keteku says my proposal was unreasonable, outrageous and ridiculous then I think he does not know what he was saying,” Mr. Asante-Bediako added.

In conclusion, Mr. Enoch Asante-Bediako intimated that the lack of communication and inconsistency on the part of the Assembly’s lawyer Mr. Cyril Boateng Keteku and the MCE, Hon. Barima Asiedu Larbi has brought them this far. Mr. Asante-Bediako said Mr. Cyril Keteku has since June 2021 failed to reply to their request regarding the land swap..

Armed Robbers Are Not from The Skies, Help Police Smoke Them Out – Cop Doku