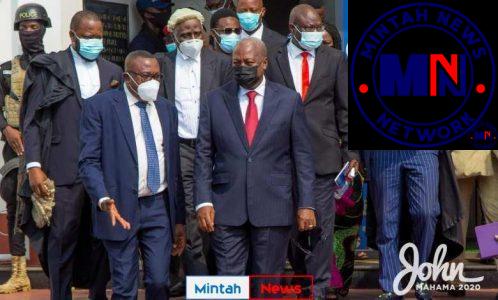 Former President John Mahama will not take the witness stand at the Supreme Court in the ongoing presidential election petition.

Rather, he has the right under the law to call witnesses in aid of his case, a member of his legal team, Dr Dominic Ayine has said.

His comment is in response to a claim by lawyers of the second respondent, President Nana Akufo-Addo that Mr Mahama has refused to testify in court.

In a rebuttal, Dr Ayeni expressed shock at the position taken by his learned colleague.

He cited how President Akufo-Addo then candidate of the New Patriotic Party in 2012 did not testify but called witnesses to testify on his behalf in the election petition to buttress his point.

The former Attorney-General could not fathom why the lawyers are pushing for the status quo to be changed.

He asked: “Is this the case that when it comes to His Excellency John Dramani Mahama, the law must change and compel him to testify?”

Dr Ayeni said the submissions made by President Akufo-Addo’s legal counsel are misplaced.

“I’m surprised a senior lawyer of Frank Davis’ status is confusing petitioner with witnesses the petitioner calls,” he said.

Meanwhile, General Secretary of the National Democratic Congress, Johnson Asiedu Nketia and Dr Michael Kpessa Whyte, who was one of Mr Mahama’s representatives in the Electoral Commission’s national collation centre (strong room) will testify in court.