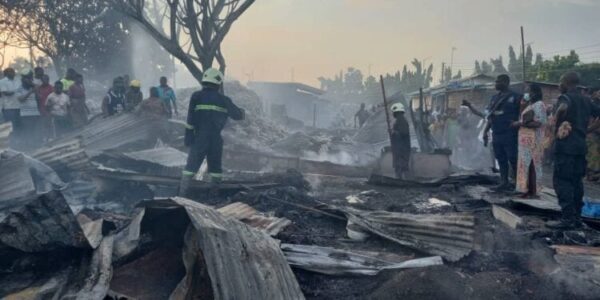 A teenager has died after a violent fire swept through makeshift structures close to the Asafo Bus Terminal in the Ashanti Region.

The boy, 17, who has been identified as Nana Yaw, burnt beyond recognition Sunday, May 2.

Several properties running into millions of cedis were also destroyed.

Speaking on Akoma FM‘s political and current affairs programme GhanAkoma, Ashanti Regional Public Relations Officer (PRO) for the Ghana National Fire Service DOIII Acquah Desmond explained that “firefighters moved in to battle the blaze which started around 2:15 p.m Sunday. It took the firefighters three and half hours to douse the inferno.”

He explained that “but for unavailability of hydrants around the Asafo commercial enclave, it would have taken us less than 30 minutes to fight the Sunday afternoon inferno”.

The victim was confirmed dead at the scene as fire officials say over 35 structures, which house head potters at that enclave, were destroyed.

Although the situation is under control, official report from the Fire Service is yet to ascertain the main cause of the Sunday wild fire.

The charred body of the deceased has been deposited at the Komfo Anokye Teaching Hospital for preservation.

Some of the displayed victims who were still counting their losses as at the time 3news.com got to the fire scene expressed their sorrow.

They appealed to government for immediate support.