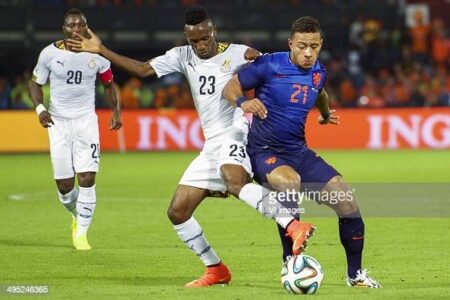 Ghanaian internationals Harrison Afful and Kwadwo Asamoah have emerged among the most loyal players in the world.

Afful, who plays for Major Soccer League side Columbus Crew as well as Cagliari’s Kwadwo Asamoah have been highlighted as among the most loyal players on the planet.

CIES Football Observatory Weekly Post has penciled the two Ghanaians as players who have played most domestic league matches during the last 10-years.

The survey was conducted between 540 teams from 35 top divisions around the world.

Afful has made 156 appearances for US-based Columbus Crew while Asamoah featured 116 times for Juventus.

Karim Benzema is the current Real Madrid squad member who played the most championship games for the Merengues during the last decade (322), César Azpilicueta (292) for Chelsea, Sergio Agüero (272) for Manchester City and Marco Verratti (221) for Paris St-Germain.

At league level, the average number of games over the last ten years for the most used player per team varies between 263 in the English Premier League and 125 in the Australian A-League.

All of the five major European championships are in the top eight position of the rankings.

This result shows that stability goes hand in hand with money and that player mobility is exacerbated where clubs lack resources.