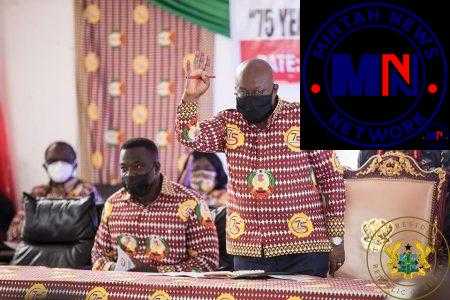 Share
The President of the Republic, Nana Addo Dankwa Akufo-Addo, has appealed to the leadership and membership of the Trades Union Congress and Organised Labour to assist Government in the country’s post-COVID-19 economic recovery efforts.
Related Posts 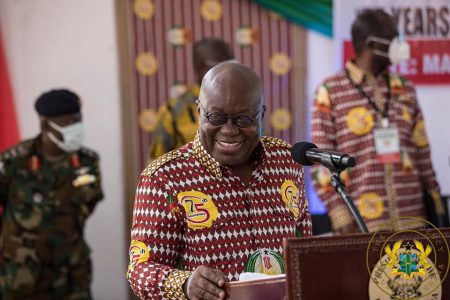 Speaking at the 11th Quadrennial Congress of the Trades Union Congress, on Tuesday, 23rd March 2021, President Akufo-Addo acknowledged, at the height of the pandemic, Government instituted several measures and interventions to lessen the impact of COVID-19 on lives and livelihoods.

These measures sustained the economy, restored some lost jobs and incomes, whilst opening windows of new opportunities for others. The time has now come for us to take the next set of actions required for the sustained recovery of the economy – he said.

These sets of action, he explained, have been outlined in the 2021 Budget Statement and Economic Policy of Government.

The truth of the matter is that we are not in normal times, and I appeal to all Ghanaians, including Organised Labour, to assist Government in this endeavour to help rebuild our public finances and economy. We need to mobilise additional resources to cater for the new challenges confronting us whilst meeting other statutory requirements – the President said.
He continued, “I, therefore, urge all Ghanaian workers to bear with government in these unusual and rather challenging times. I am confident that sooner, rather than later, and together, we can create the happy, progressive and prosperous nation we all desire.” 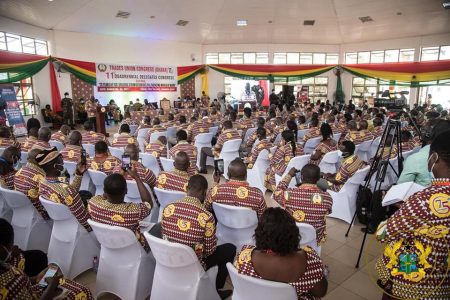 Whilst appreciating the concerns expressed by a section of Ghanaians, especially, with regards to imposition of some new taxes, President Akufo-Addo reiterated that “salary increments for public sector workers have not been frozen for the next four years”.
The President told the gathering that, but the onset on COVID-19, all the macroeconomic indices, between 2017 and 2020, were all pointing in the right direction, evidenced by a cut in the fiscal deficit, stability of the currency, reduced cost of borrowing, and annual GDP growth rates of 7%, with Ghana, within the period, becoming the largest recipient of foreign direct investment in West Africa.

COVID-19 resulted in a drastic slowdown in economic activity and a huge drop in domestic revenues, combined with a sharp and unplanned hike in COVID-related expenditures. In sum, this unprecedented crisis led to a sudden shortfall in Government revenues amounting to some thirteen billion, six hundred thousand cedis (GH¢13.6 billion), and an unexpected and unavoidable rise in expenditures of some eleven billion, seven hundred thousand cedis (GH¢11.7 billion), he said.

The 2021 budget, the President explained, has set the goal of reducing the budget deficit gradually from 11.7% in 2020 to less than 5% by 2024, whilst growing the economy and creating jobs.

To accomplish this, additional sources of revenue are required, and that is the reason why the budget introduced four key revenue measures to improve on sanitation and pollution, improve the health sector, and defray the cost of the financial sector clean-up – he added.

In addition to this, President Akufo-Addo told the gathering that, towards revitalising and modernising the Ghanaian economy, and returning it to high and sustained growth for the next three years, Government has developed and is currently implementing the one hundred-billion-cedi (GH¢100 billion) Ghana CARES ‘Obaatampa’ Programme.
The key projects under the CARES Programme include supporting commercial farming and attracting educated youth into commercial farming; building the country’s light manufacturing sector; developing engineering/machine tools and ICT/digital economy industries; fast tracking digitalization; developing Ghana’s housing & construction industry; establishing Ghana as a Regional Hub; reviewing and optimizing the implementation of Government flagships and key programmes; and creating jobs for young people, and expanding opportunities for the vulnerable in society, including persons with disabilities.
Touching on the matter of lumpsum benefits to 2020 pensioners, the President assured Organized Labour that SSNIT and the National Pensions Regulatory Authority (NPRA) are working with the Ministry of Employment and Labour Relations on the imminent resolution of this matter, assuring that the matter would have been concluded by the end of the year.
On the issue of the National Unemployment Insurance Scheme that was announced last year, President Akufo-Addo noted that a Committee, made up of the members of the Social Partnership Council, has been setup by the Ministry of Finance to look at the establishment of this Scheme, which will provide temporary income support to workers that are laid off.

The Ministry of Finance has already earmarked some fifty million cedis (GH¢50 million) towards its operationalisation once discussions are completed – he added.