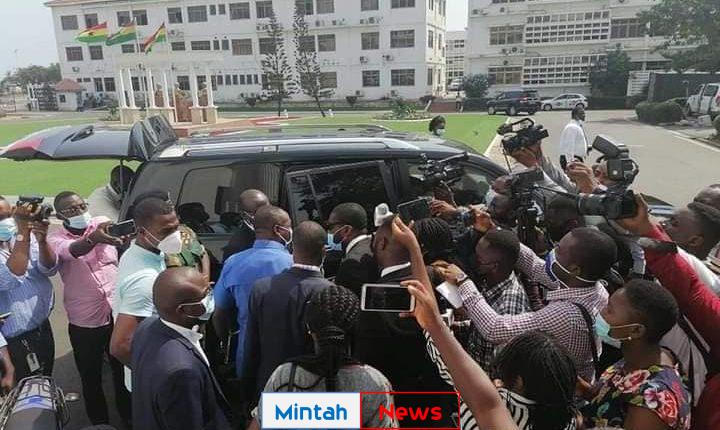 A five member Supreme Court panel presided over by Justice Yaw Appaw, hearing the case brought by the Attorney General seeking to quash the decision of the Ho High Court that granted an interim injunction against the gazetting of the 2020 Hohoe Parliamentary election, has set Tuesday the 5th of January 2021 as date to deliver it ruling on the case.

Before the Supreme Court invited the Deputy Attorney General for his oral arguments, lawyer for the interested parties, Tsatsu Tsikata, raised a preliminary objection against the inclusion of Justice Clemence Hoyenuga on the five-member Supreme Court panel duly constituted by the Chief Justice, Anin Yeboah, to adjudicate the matter.

The grounds for his objection is that Justice Clemence Hoyenugah has a long standing relationship with the Member-of-Parliament-elect for the Hohoe Constituency, John Peter Amewu and that his continued stay on the panel will result in a real likelihood of bias on the part of the Supreme Court judge for the benefit of the Energy Minister and Hohoe MP-elect.

Godfred Yeboah Dame, the Deputy Attorney General in his opposition to the objection of Tsatsu Tsikata, told the court that the application was “totally baseless and without merit.” He indicated further that Mr. Tsikata in his objection did not provide any evidence whatsoever and that the application was speculative and meant to delay the process of adjudicating the substantive case before the court.

The five-member panel when it reconstituted after rising for about thirty (30) minutes to consider the objection, dismissed the preliminary objection of Mr. Tsatsu Tsikata. The court ruled that Mr. John Peter Amewu is not a party to the instant application even though he may be remotely affected by the decision of the court. To this end, whatever relationship that may exist between Justice Clemence Hoyenugah and John Peter Amewu “does not arise for consideration whatsoever.”

“There being no merit in the instant application therein, same is hereby dismissed,” Justice Yaw Appaw ruled.

The Attorney General on the 29th of December 2020, filed a motion on notice at the Supreme Court praying the court to quash the decision of the Ho High Court that granted an interim injunction in an ex parte application by five applicants seeking to stop the Electoral Commission (EC) from gazetting the parliamentary results of the Hohoe Constituency in the 7th December 2020 Presidential and Parliamentary Elections.

The motion entitled “The Republic versus High Court, Ho, Ex parte, Attorney General (Applicant), Prof. Margaret Kweku, Simon Alan Opoku-Minta, John Kwame Obompeh, Godfred Koku Fofie, Felix Quarshie (Interested Parties)”, among others, is seeking an order of certiorari directed at the High Court, Ho, Volta Region, with Justice George Buadi presiding, to “bring into this Court for the purpose of being quashed the orders of the court dated 23rd December, 2020 in Suit No. E12/40/2021 entitled “In the matter of an application under Article 33 of the Constitution, 1992 and order 67 of the High Court (Civil Procedure) Rules, 2004 (C.I.47) and the Inherent Jurisdiction of the High Court between Professor Margaret Kweku, Simon Alan Opoku-Mintah, John Kwame Obompeh, Godfried Koku Fofie, Felix Quarshie and the Electoral Commission, Wisdom Kofi Akpakli, John Peter Amewu and The Attorney-General”

Additionally, the Attorney General is also seeking an order prohibiting the High Court, Ho, Volta Region from further hearing or conducting proceedings in the said case. It is the contention of the Attorney General that the orders of the Ho High Court dated 23rd December, 2020, constituted a “patent error on the face of the record to the extent that they purported to confer on the applicants (interested parties herein), non-existent voting rights in respect of the Hohoe Constituency in the Volta Region.”

Argument of the Attorney General

According to the Statement of Case filed by the Attorney General on behalf of the Member of Parliament-elect for the Hohoe Constituency, the facts of the case make it abundantly clear that the pursuit of the action filed by the interested parties at the High Court, Ho, is an attempt to enforce a non-existent right.

“The interested parties have already been told by this Honoruable Court that, to the extent that C. I. 95 places their traditional areas of Santrokofi, Akpafu, Likpe and Lolobi in the Hohoe Constituency, same is unconstitutional. CI 95 ought to be amended in order to place the said traditional areas in the Oti Region. They ceased to be part of the Hohoe Constituency in Volta Region immediately the Oti Region was created and they were put thereunder.

The alleged failure of the Electoral Commission to amend CI 95 to give effect to the boundaries of the new regions, does not mean that the interested parties together with the residents of the 4 areas, can continue to assert voting rights in the Hohoe Constituency. To do so will be inconsistent with Article 47(2) which prohibits a constituency from straddling two regions, and will create further constitutional chaos,” the Statement of Case noted.

“It is thus beyond doubt that the action at the High Court, Ho, is a palpable abuse of the process. The wrongful assumption of jurisdiction by Justice Buadi, was a serious error apparent on the face of the record. This court ought to exercise its supervisory jurisdiction to prevent a situation where the interested parties will, through the backdoor, surreptitiously seek to assert the right to vote in a manner which is constitutionally frowned upon.

The interested parties’ case is borne out of mischief and an attempt to judicially sanction unconstitutionality. It is merely a vile attempt to upset the hard won electoral victory of the winner of the parliamentary election in Hohoe Constituency through an unjustified invocation of the court’s human rights jurisdiction,” the Attorney General further stated in his argument.

On the 7th December, 2020, Presidential and Parliamentary Elections were held throughout Ghana for the election of a President and Members of Ghana’s Parliament in two hundred and seventy-five (275) constituencies existing in the country.

The Parliamentary Election in the Hohoe Constituency in the Volta Region resulted in the due declaration by the Electoral Commission of John Peter Amewu (standing on the ticket of the New Patriotic Party) as the winner, having obtained 26,952 (55.18%) of the popular votes. Subsequently, the results of the Parliamentary Elections nationwide were duly gazetted by the Electoral Commission on Tuesday, 22nd December, 2020.

OPINION: SPEAK OUT BEFORE IT’S TOO LATE – Efo Worlanyo Tsekpo.