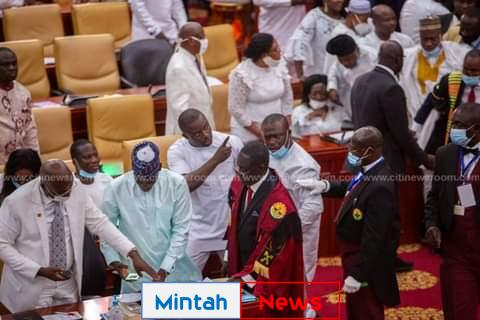 The Clerk of Parliament, Cyrill Nsiah says he is unable to recognize Member of Parliament-elect of Assin North, James Gyakye Quayson as a member of the house.

This follows his confirmation of receiving the writ of an injunction granted against the Assin North MP-elect, after MP-elect of the Effutu Constituency, Alexander Afenyo Markin had made enquiries to that effect during the inauguration of the 8th Parliament.

He said, “I was duly served and I am therefore unable to recognize James Quayson for the purposes of the election of Speaker.”

However, MP-elect for Tamale South, Haruna Iddrisu argues that Mr. Quayson is yet to be served the writ of injunction from the court thus should be allowed to participate in the proceedings of the house till he’s formally served.

“…Under the circumstances, let him err on the side of law and bear the consequences in court. So let him take the oath because he’s not been served any process,” he said.

The petition was filed by one Michael Ankomah that the MP-elect still held on to his Canadian citizenship when he was filing to contest in the December polls.

But giving his ruling on Wednesday, January 6, 2021, the presiding judge, Justice Kwasi Boakye said Mr. Quayson was “restrained from holding himself out as Member of Parliament-elect for the Assin North constituency within the Central Region of the Republic of Ghana and further presenting himself to be sworn in as Member of Parliament-elect as such until the final determination of the petition.”