The chief executive officer of the Atta Mills institute, Samuel Koku Anyidoho has reveal in a recent post that he hate former President John Mahama.

The former deputy secretary of the biggest opposition party NDC Samuel Koku Anyidoho who has be suspended indefinitely from the NDC party for violating the party rules seems not to be cool with the party executives.

Because of his suspension,he has  warned the general Secretary of the NDC Johnson Aseidu Nketia to retract his actions,he gave him 72hrs.

Read the full Screenshot below 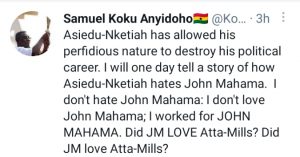 You Are A Rich Man- Don Jazzy Praises Sarkodie

Human Head Found In A Fridge Of Popular Ghanaiain Footballer