President Akufo-Addo has stated unequivocally that intra-African trade is the surest way for the African continent to transform both the economies of all its member states as well as the fortune of the entire African financial and economic situation. 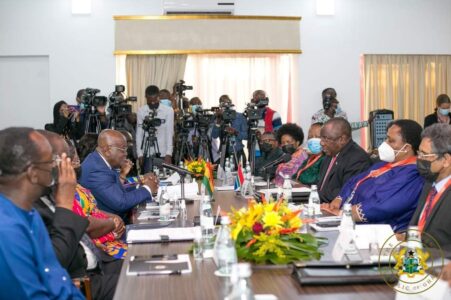 “There is one set of data that for me, puts together everything that we have been speaking about here”.

The President observed in his address at the Ghana–South Africa Business Forum held at the Kempinski Gold Coast City Hotel today the 5th of December 2021, as part of activities of the three-day official state visit of South African President, Matamela Cyril Ramaphosa to Ghana.

These two statistics tell us everything about the relative economic development of Africa and of Europe. So the need for us to focus on what we can do to up dramatically intra-African trade is laid bare by these statistics – President Akufo-Addo said.

According to President Akufo-Addo, the setting up the African Continental Free Trade Area (AfCFTA) is a key architecture that has been established to help Africa achieve the high target of intra-trade among itself as has been achieved by Europe.

“If truly we want to generate prosperity on our continent, the success of the AfCFTA is absolutely critical to our capacity to do that.

“And as God will have it, at this critical moment in our history, the AfCFTA secretariat is located here in Ghana and the first Secretary General of the AfCFTA, is a South African who has shown a great deal of aptitude and enthusiasm for the work.

“So it tells us that our two countries have a particularly sensitive role to play in the development of the AfCFTA,” President Akufo-Addo said.

President Cyril Ramaphosa in his address noted that the private sector both in Ghana and South Africa are key to the ability of the two countries to increase trade between themselves.

He indicated that Ghana and South Africa, “do need to intensify efforts to build strong industrial bases and expand exports to create more employment opportunities for the people on the continent, especially young people.

“Bilateral trade between Ghana and South Africa is growing, and this is pleasing. I would like to see more heightened growth.

“Much as we are growing, I would like to see us grow more exponentially. In 2020, the trade volumes between Ghana and South Africa reached just over, 14 billion.”

“To correct this imbalance, we need to develop manufacturing capacities on both countries sides,” he added.