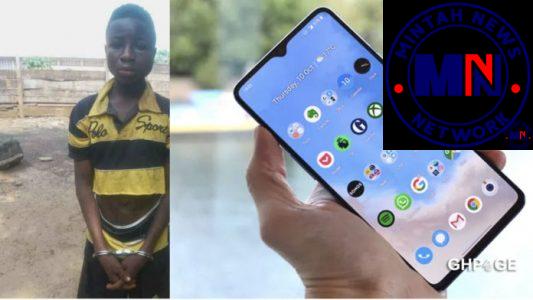 A Junior High School student has been arrested for allegedly murdering his biological mother over his missing phone and memory card.

The student identified as Emmanuel Gyan accused his 52-year-old mother of stealing his phone.

According to reports, Emmanuel confronted his mother over his missing phone and memory card and got angry when he didn’t receive any positive reply.

Emmanuel who was very furious, hit his mother Faustina Agyeiwaa with a pestle on her head repeatedly until she fell unconscious.

In an attempt to burn her, the 17-year-old Junior High School student set his mother in flames.

The barbaric act was said to have taken place on Monday, 15th March 2021 at Wassa J.Y No.1. in the Sefwi Wiawso District.

According to the Sefwi Wiawso Police, Emmanuel was brought to the police station by his father, Isaac Somuah with the help of one Stephen Amponsah.

However, Madam Faustina Agyeiwaa’s body has since been deposited at the Bibiani Government Hospital mortuary awaiting autopsy.

The FBI reportedly picking up fraud boys in Ghana