A kaduna based environmental activist, and the founder of Teku international farm,Ibrahim salisu has constructed The First- Bamboo tree toilet and bathroom that is eco-friendly 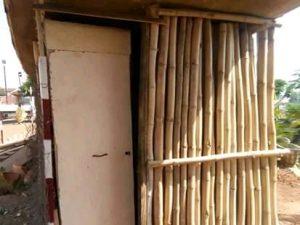 Both the toilet and bathroom that can last for many years, and it aimed at reducing open defacation in both rural and urbans centres and also designed to reduce scarcity of toilets in most of the houses across the country.

According to him , the systems of practicing of Open defecation brings with it significant health risks, linked to deaths from diarrhoea, cholera, typhoid and other dangerous diseases and infections.

It is also a risk factor for Violence against women and girls most especially those residing in a rented houses in both rural and urbans center were women may need to leave home in the dark to find somewhere to defecate.

The environmentalist pointed that , embracing constructing Bamboo tree toilet and bathroom would surely reduce the amount of environmental diseases and infections spreading through the air

He note that , millions of Nigerians still defecate openly in and on bushes, gutters, sidewalks, motor parks, recreation parks, rivers and streets amongst others. Some efforts have been made over the decades to reduce the cases of open defecation in Nigeria but fail woefully due to lack of commitment and dedication by citizens

Ibrahim said, he has start training some young bricklayers ,laborers and some house engineers that are residing in the state, new ways and techniques on constructing bamboo toilet and bathrooms in order to reduce the daily battled by residence that are living in rented houses due to scarcity of toilets in their home.

He said, Bamboo toilet is the cheapest and that can last for many years due to its strength and how it can equally adapt to all ecological challenges ,

Open defecation hinder achieving the targets set for sustainable development. Stressing that Poverty is one of the prime reasons for open defecation and this in turn has negative effects on social outcomes, wellbeing, ecosystems, and the economy.

Adding that the number of toilet infection increases every day due to inadequate toilets in most home ,hence the need to address the situation on time

While calling on all stake holders including Government ,traditional title holders and religious leaders,women organization and youth to equally join the campaign toward saving the society against all form of environmental challenges due to human irrational activities

It could be recalled that Ibrahim is the first to construct Bamboo upstair in kaduna, Nigeria that attracts thousands of tourist from other countries to come to Nigeria

In his own contribution, a climatologist Dr Piman Hoffman ,who is also the assistant Director of African climate reporters says there are so many factors that contribute to open defecation in both rural and urban cities of Nigeria and some part of African which need to be tackles in order to save millions of women,childrens and elderly once against the spread of infections and diseases

According to him “high density of population, lack of toilets, poverty, and the beliefs that defecating in the open is normal and healthy, and that building a lavatory in the house would be insanitary.

” There is poor awareness on the dangers associated with open defecation to both human,animals and living organism in the environment.

He added that Open defecation affects nations’ overall economic performance by causing: disease and death, loss of productivity due to illness, costs for accessing and treating drinking water, losses in education, and time spent accessing sites for open defecation

He then called on Government, and Non –Governmental Organizations that focuses on protecting the environment to joined the Campaigh toward raising more voices on the need to embracing building Toilets and bathroom with Bamboo trees at home, schools,markets, football view center,mosque,Churches,temples and other recreation centres in order to halt the spreading of pollution bia open defecation