With the first of its kind ever beach stadium constructed by the Kaduna State Government at the Murtala Square, the state is open for all beach games and remains a top choice for hosting. 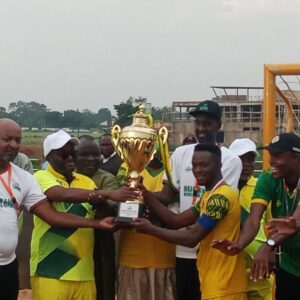 Chairman of Kaduna State Beach Soccer Association, Engineer Musa Nimrod expressed this, while speaking to newsmen at the closing ceremony of the Beach Soccer Super 4 at the Murtala Square on Saturday July 31, 2021.

“With this, Kaduna is open for beach competitions, being the only state with a beach stadium in NIgeria. Not for only beach soccer, but beach volleyball as well as beach handball,” an excited Nimrod said.

On his feelings about his team, Kada Beach Soccer Club (BSC) finishing as runners-up, he explained that even if they had won the final game, Kebbi BSC would have still carried the day.

“Even if Kaduna won the final match, Kebbi would have still won the league because Kaduna were trailing behind in points after losing two previous matches.

“We were in Lagos, Kebbi, Pategi and now in Kaduna. It is a league and Kada dropped points along the way, by losing two matches in Pategi,” he explained.

On his impression about the league and the Super 4, he said it was a huge success.

“This is first stanza of the league NFF approved. I would give it 85 per cent score mark we did our best in making it succesful. With or without major sponsors, we did our best,” he said.

Ghanaians are tired of Sarkodie one way of Rapping -Ziega