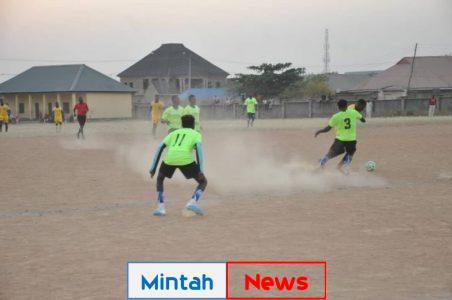 Visitors, Kajuru Lions FC felt at home at the opening ceremony of the Speaker Kaduna State House of Assembly, Rt. Honourable Yusuf Zailani Peace and Unity Soccer Competition as they beat one of the hosts Sabo GRA Zone D 1-0 in the opening match watched by several dignitaries.

Kajuru Lions took advantage of the excitement on the part of the hosts in surprising them shaking their net early in the game on Sunday December 13, 2020.

The game subsequently witnessed a goal drought afterwards, as attempts by both teams at each other’s goals were frustrated by defenders and goalkeepers.

In an interview with newsmen, Rt. Honourable Yusuf Zailani said that Kaduna needs such laudable initiatives that encourage bonding.

He praised the standard of organisation and quality of skills exhibited at the competition.

Represented by his SA, Hon Kabiru Hamza Zangon Aya, Zailani promised to personally witness the final and present trophy to the winners.

In his speech, President General, Tsaunin Kura GRA Residents Association (Sabo GRA), Comrade (Dr.) Silas Adamu, said he was at the kick off of the maiden edition of Rt. Honourable Yusuf Zailani Peace and Unity Cup.

“As the President General of this community, we are happy that in spite of daunting challenges encountered, we were able to muzzle up resources to ensure it is a resounding success.

“This competition just like other sporting activities, is targeted at uniting youth and by extension, integrating communities within the metropolis.

“It is expected to be seven days of scintillating soccer action from December 13 to 20,” he said.

Jennifer Lopez Surprise Her Mom on Her 75th Birthday