Know Who You Help, Many Are Just Not Ready To Hustle – Shatta Wale

Charles Nii Armah Mensah Jnr., popularly known as Shatta Wale, is a Ghanaian dancehall musician who is recognized for being one of the few musicians that have extended a helping hand to many.

Shatta Wale, as one of the most important figures in the business, recognized that we can only progress by raising others, and as a result, he has aided many individuals both inside and beyond the music industry.

However, he has noticed that most people use his forbearance as an excuse to avoid working hard to improve their life and instead rely on him for survival.

As a result of this, he has gone to social media to urge other charitable figures to be cautious about who they aid.

Many people, he claims, are simply not willing to work for themselves and would rather rely on those who do.

Below is the screenshot of what Shatta Wale wrote on his Facebook page: 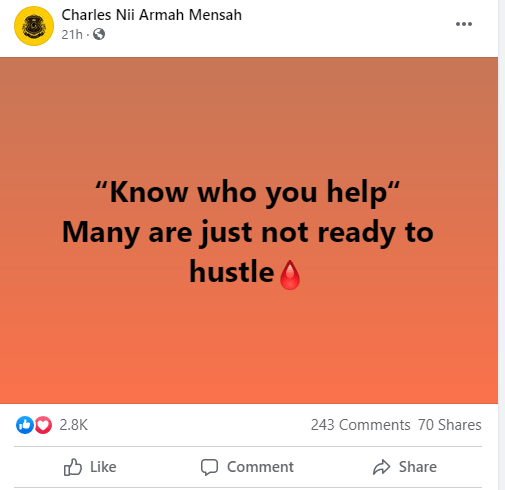 Meanwhile, Mugeez, the Ghanaian musician and R2bees member, has urged people chastising Sarkodie for not returning their calls or texts that it wasn’t intended to be their problem, to begin with.

Sarkodie could have his reasons for not returning their calls or responding to their messages, Mugeez stated in an interview, and it’s not their job to figure out what those reasons are, so they shouldn’t make a big deal out of it.