The President’s nominee for the Kwahu East District Assembly, Hon Isaac Agyapong has received 100 percent endorsement from the Assembly Members.

The 32 assembly members at Kwahu East who voted “yes” were all seen chanting and singing praises to celebrate the MCE-elect who has been given the mandate to serve another term. 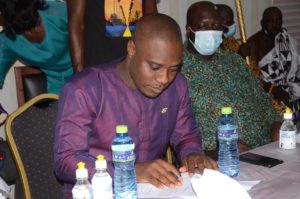 The confirmations were held on Tuesday 28th September 2021 at Abetifi, Assembly’s capital with the Eastern Regional Minister Seth Kwame Acheampong swearing him into office after the EC officer confirmed Hon. Isaac Agyapong as DCE elect.

The District experienced a calm atmosphere but an exciting moment as Assembly members speaking to the media expressed confidence and appreciation over the appointment made by the president. 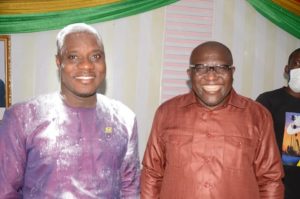 Addressing the media, the Eastern Region Minister Seth Kwame Acheampong expressed appreciation to the assembly members for showing leadership skills adding that, this is a call for development and further appealed to them to continuously support the vision and agenda of the President, HE Nana Addo Dankwah Akufo Addo.

Hon. Isaac Agyapong also expressed his profound gratitude to His Excellency the President of the Republic of Ghana, Nana Addo Dankwa Akufo-Addo for his re- nomination to the Office of District Chief Executive for Kwahu-East District.

“I am humbled and honored by the trust and confidence he has repose in me, I sincerely, thank My Hon. MP, Bryan Acheampong, the Constituency Executive Committee led by Isaac Kwaku Addo and the entire Constituency for their unwavering support and unity of purpose throughout the processes leading to my re-nomination and subsequently my confirmation yesterday, I thank Hon. Assembly Members for voting massively to confirm my nomination” he wrote on his Facebook wall.

“I thank the Regional Party Executives and the Hon. Regional Minister, Seth Kwame Acheampong for the support”

“To Nananom and all the relevant stakeholders, I say thank you, I know the enormity of the task ahead but I am optimistic and hopeful that together we can overcome the difficulties ahead”

“Finally, I say a big thank you to my Wife, Children and my entire family, for I would not be here without their love and tireless support”

“Every life is a story, thank you for being part of my story.