Abena Serwaa Makosa, A class one teacher at Animkrom D/A primary school has rendered an apology to the authorities following her kind gesture to her students which generated much controversy over the past weeks.

It will be recalled Madam Abena Serwaa went viral after photos of her were released online for feeding her students with her pocket money.

Her act generated a misunderstanding between the Ghana Education service, the teacher Abena Serwaa and the office of the district chief executive of the Atwima Nwabiagya North.

GES Reschedule Reopening For SHS 3 Students To This New…

BREAKING: GES Announces The Closure of All Basic School For…

The Education office also had their dissenting view about her act as they pointed out that a teacher does not have any right to be taking pictures of the students and sharing them online.

Abena took to her facebook page where the pictures were first shared and had this to say: 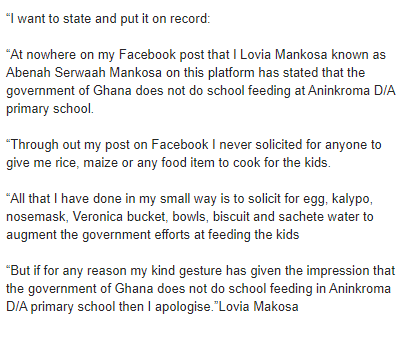 GES Reschedule Reopening For SHS 3 Students To This New Date

BREAKING: GES Announces The Closure of All Basic School For This Reason

Rastafarian-Achimota Saga: 3 Former Teachers of Iras Marhguy Speak Up; As They Give Good Account of…