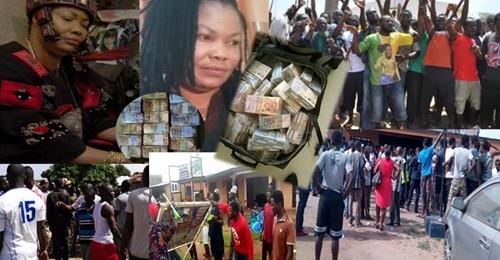 As it was reported the National Security Intelligence Operative in collaboration with the National Communication Authority arrested Patience Asiedu popularly known on social media as Agraa Agraa or Nana Agradaa for illegally transmitted without licenses of Thunder TV and Ice 1 Tv leading to court followed by 500,000.00 Ghana cedis self- recognizance bail.

On Thursday 22 April 2021, Nana Agradaa was granted bail, her customers who attended to her for double money in which she describes it as Sika Gali with the understanding that, if one brings their money, she will use her magical powers to increase their money for them is reported to have massively stormed her residence.

Adding up to the given information, an audio report indicates that the customers attended Nana Agradaa’s residence with the intention of collecting their money as a result of the fetish priestess’s failure to double their money for them.

Nana Agradaa is reported to reappear before the court on May 12, 2021.