President of the Republic, Nana Addo Dankwa Akufo-Addo says the modernization agenda of the country is systematically gathering momentum as government takes efforts to have all the important infrastructure needs of the nation addressed.

Addressing attendees of the commissioning ceremony at the Kwabena stretch of the Pokuase Interchange today the 9th of July 2021, President Akufo-Addo entreated all citizens to join hands with his government to build the country so desired.

“The modernization of Ghana is steadily gathering momentum and I entreat all Ghanaians to join hands in building the Ghana we want,” President Akufo-Addo said.

According to President Akufo-Addo, his administration will continue and complete all other major road infrastructure projects currently under construction across the length and breath of the country. The President also urged all road users to be mindful of the various road safety measures put in place for the safe use of the facility.

The Ministry of Roads and Highways must ensure the proper maintenance of the Pokuase Interchange over the design period. I appeal to the users of the facility, especially drivers, to adhere to the various road safety measures put in place for the safe use of the facility –  President Akufo-Addo said. 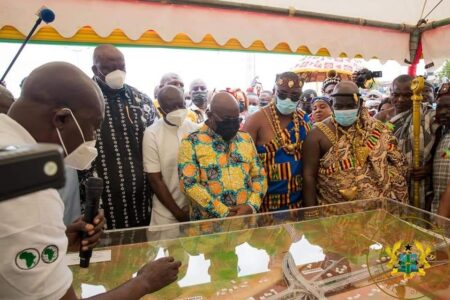 The Roads and Highways Minister, Kwasi Amoako-Attah, in a brief statement, noted that the decision to upgrade the Pokuase Interchange from a 3 to a 4 tier was a demonstration of the Akufo-Addo administration’s commitment to improve the country’s road infrastructure.

He assured the nation on behalf of the President that the Pokuase Interchange has been constructed to meet all the high international standards with regard to road construction and that the country gained “real value for money”.

To avoid needless accidents on the Pokuase Interchange,  the Roads and Highways Minister urged road users and drivers to pay particular attention to the ongoing media education on how to navigate the multiple road sections on the new interchange.

The Pokuase Interchange has been constructed to the required standards and specificafions approved by the Ministry of Roads and Highways. I am again happy to announce that despite the project complexities and the intensity of the works, no major fatalities were recorded during the entire construction period,” the Roads Minister said.

This four-tier interchange is a bit complex compared to others already constructed and ongoing in the country. I will therefore entreat all road users to watch the educational campaign on TV and other social media channels to be conversant with its usage in order to avoid needless accidents. Safety has been the hallmark of this project so l appeal to all and sundry to adhere to the directional and all information signs- Amoako-Attah added. 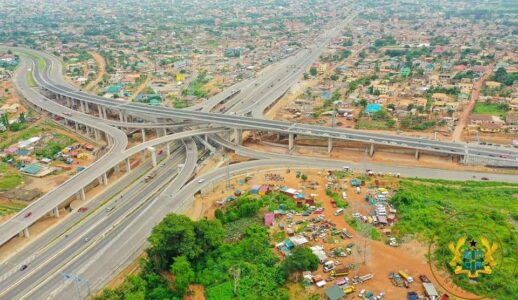 The ACP Junction at Pokuase is a key intersection along the Accra Kumasi Highway(N6). The N6 over the past years has been the bane of residents and commuters who traverse it due to the overwhelming congestion during morning and evening peak hours. Commuters previously spent up to 2 hours in traffic between the Amasaman and Ofankor stretch of the N6.

Motorway Roads yet to commence, it was necessary to address a major bottleneck (Pokuase Intersection) on the N6 (Accra-Kumasi Highway) and the A15 (Awoshie-Pokuase-Ritz-Motorway). This is in line with the transport sector’s objective of govenment to provide an integrated, viable and

sustainable transport infrastructure to meet the goals of poverty reduction and regional integration.

The Pokuase Interchange was initially designed as a 3-tier. The Contractor undertook a value engineering exercise as part of the requirements of the contract and proposed a 4-tier interchange. This proposal was mainly to eliminate the left turns on the 2nd tier of the original 3-tier design. This was reviewed by the Consultant and DUR and subsequently approved by the Ministry of Roads and Highways.

The opening of the interchange will essentially ease traffic congestion, improve urban mobility, which will benefit the trucking industry, agro-industries located within the project corridor, facilitate socio-economic activities, and generally improve livelihoods and build social value. It would also minimize the negative effect of vehicle emissions on the environment. 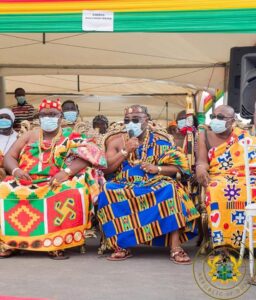 Messrs Associated Consultants Limited (ACON)/Bigen Group were the supervising consultant. The works were executed by Messrs Zhongmei Engineering Group Ltd. The Department of Urban Roads was the agency under the Ministry of Roads and Highways responsible for the execution of the project.