Comrade Murtala Muhammad Gamji, the immediate past president of Nigeria Youths Council an umbrella organisation which unites from all over the country, has demanded the resignation of the head of the Federal Character Commission Abuja, Dr. Muheeba Dankaka. 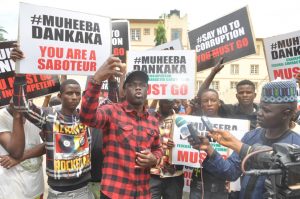 Comrade Gamji who led the a group of protesters to the Headquarters of FCC on Tuesday morning, said that based on the complains by youths across the country against the chairman, he and the protesters were forced to act . 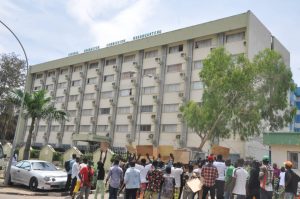 I am the past president, Nigerian Youth Council

“Out of the 36 Commissioners of the Organization, 26 of them have written petitions against her. Her Commissioners, her workers, her gateman, government officials and even politician not happy with her.

“She is high-handed, arrogant and do not listen to complains from her workers”he added.

Comrade Gamji, there gave the Federal Government a three weeks ultimatum to sack or face the wrath of over 70 million Nigerian youths.

However, in a show of support for the youths, a worker with the commission who choose to not to be named said the Chairman, Dr. Muheeba Dankaka is not only high-handed, she is also highly inconsiderate and can embarass staff at will, adding he support the actions of the protesters.

However, a senior officer of the Commission, Sir Tonye Okio, the commissioner representing Bayelsa at the commission sought to pacify the protesters when he addressed them.
He denied all the allegations levied against Dankaka as a misunderstanding.

Fielding questions from Journalists in front of the youths, Mr.Okio said,
” The youths needs jobs and that is our number one concern. However, the Federal Character Commission does not give jobs. FCC as an organisation don’t employ people.
We are not an employment agency.

” What we do is to ensure that there is equal and even representation of all Nigerians .
For example, if Four people are allocated to Bayelsa, we make sure that four also goes to Borno and so on.
We only ensure that if there is employment every state is equally represented.

He pleaded with the youths to be patient with the Federal Government as the Government is working hard to create employment opportunities for the youths .

Responding to the allegations that Muheeba Dankaka is high-handed, Okio dismissed the claims by saying,

” Who is she highanded to ? To the staff or the commissioners. President Muhammadu Buhari has done well by giving us a mother in the person of Muheeba Dankaka.

” This is the first time in the history of the Commission that staff welfare are taken into consideration.She ensued that all commissioners were provided with official cars, took care of welfare of the staff.So we don’t see why the allegations of high-handedness comes in, he said.

Video:Couples Get Stuck While Having Sex In Lake Bosomtwi