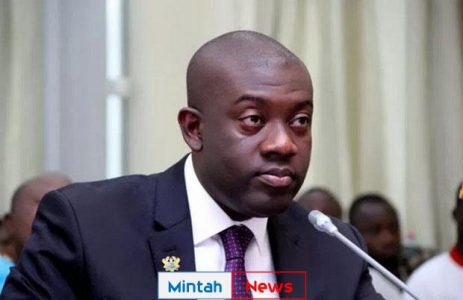 Kwadwo Oppong Nkrumah, Ofoase Ayiribi MP says the bribery allegation against a Supreme Court judge by Asawase MP, Muntaka Mubarak, is a deliberate attempt to drag the integrity of the Apex Court into disrepute.

Kojo Oppong Nkrumah believes the NDC is fighting a lost cause with its 2020 flagbearer’s election petition before the Supreme Court.

The Caretaker Information Minister said the party has no case to start with.

He, therefore, said party leadership of the NDC is resorting to various allegations to poison the minds of the public against the judges ahead of the hearing of the case.

“The NDC is on a path to smear and undermine the integrity of the Supreme Court and its Justices and they are doing that because they are clear in their minds that this petition before the court is a lost one.

“The first evidence you notice is Muntaka Mohammed Mubarak who goes to national television and alleges without more that a Supreme Court judge has been involved in calling two NDC MP-elects and trying to convince same to vote for Speaker Mike Ocquaye during the election of the Speaker.

“The real object of that allegation is to begin to poison the world ahead of this litigation,” Mr Nkrumah said.

The comment comes as a response to a member of John Mahama’s legal team Dr Abdul Baasit Bamba who has described the seven-member panel to hear the 2020 election petition as unfair and unbalanced.

Dr Bamba on the AM Show, Friday, insisted that senior judges were not made part of the panel but rather judges who were mainly appointed by New Patriotic Party (NPP) governments.

Muntaka Mubarak who is also the Chief Whip of the NDC Caucus in Parliament, on JoyNews’ The Probe alleged that a Supreme Court judge tried to influence the outcome of the Speakership elections for the 8th Parliament.

Subsequently, Chief Justice Kwasi Anin-Yeboah in response has assured the general public of an enquiry into the allegation.

Mr Muntaka has also assured to assist the apex court with evidence though he is yet to provide any to back his claims.

Reacting to the comments, Kojo Oppong who is also a spokespersons for President Akufo-Addo’s team has cautioned the NDC to desist from deliberately making unfounded allegations to mar the reputation of the Supreme Court judges, as such claims, he said is a compromise on the country’s democracy.

‘I was elected Speaker after securing 138 votes’ – Bagbin