In a brazen show of confidence and territorial dominance, meat sellers, petty traders, and iron workers in union with street urchins, mostly of Hausa and Fulani origin, coordinated themselves and went berserk on alleged officials of the Enugu Capital Territory Development Agency (ECTDA), for attempting to forcefully evict them and demolish their shanties at the New Artisan livestock market of Enugu metropolis, late 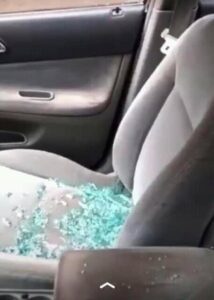 hThursday afternoon. The situation was characterized by the wanton destruction of properties, vandalization of some vehicles of the officials and the policemen who accompanied them to ensure enforcement. While some had their windshields smashed and the interiors of the vehicles vandalized, others were beaten and overpowered by the mob. The “artisans” could be seen wielding dangerous weapons, like machetes, knives and various kinds of clubs; including unconfirmed reports of an AK47 assault rifle sighted in the possession of one of them. Clouds of smoke could be seen all the way from Upper Chime Lane of New Haven, Enugu. A few passersby were molested and for a while, the Enugu-Port Harcourt expressway was blocked by the raucous artisans. 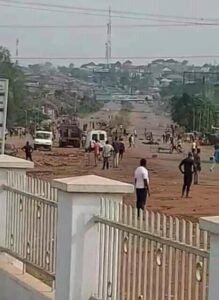 The grouse, according to the occupants, was that, Government had deliberately targeted them because the New Artisan Livestock market was mostly populated by the Hausa Fulani. They accused the government unjustly wanting to take away their legitimate place of business activities. They also claimed that Government officials did not appropriately notify them about an impending demolition exercise. There were also allegations of extortion in the past, against the officials of the ECTDA, to extend the exercise. For that and other crimes, the artisans say they would not allow the demolition exercise to take place, and so they took the laws into their hands, having seen that the Police was in league with the officials of the ECTDA.
In a twist of events, on the FACEBOOK account of the Enugu Capital Territory Development Agency, the official statement was a flat denial of any such directive or involvement in any such exercise, nor forceful engagement by their officials. This led some persons thinking that some doomsday plotters were trying to leverage on the existing security challenges in Nigeria to instigate a breakdown of law and order in Enugu Metropolis. All attempts, including Phone calls, SMS and WhatsApp messages, to reach the Police Public Relations officer for Enugu state, ASP Daniel Ndukwe Ekea, yielded no positive results as at the time of filing this report; neither was such attempts reciprocated to ascertain the role and involvement of the Police in the matter.
Recall that this incidence was preceded by a motion sponsored by Assemblyman, Hon Okwu Chinedu, representing Aninri Constituency, at the Enugu state House of Assembly, in May, 2020. Sighted in the motion, Hon. Okwu is quoted as saying that “the new artisan market has become a hideout zone for highly dreaded criminals, drug dealers, breeding of hooligans, terrorists, housing criminals, a center for prostitution, human trafficking, cult activities and other vices. Every blessed night at the new Artisan market, has been verified to be a night of terror and devilish activities, like Sodom and Ghomorah, in the Bible. This calls for an urgent intervention by the State Government; for total cleansing and purification of the land, through demolition and evacuation of the premises.” Hon Okwu went further, “if nothing is done urgently, this horrible place shall breed hoodlums that will be worse than Boko Haram in a few months to come. Therefore, we must be committed to the safety of our people and the state at large.” He went on, “we must not allow evil to take charge of our environs. We must uphold the peaceful disposition of our dear Governor, Rt. Hon. Ifeanyi Ugwuanyi and must be ready to defend our citizens through legislative means of ensuring a crime free zone.” The motion was speedily carried by the House, as all agreed that the situation was dire!
As if in answer to prayers from the Peace lovers of Enugu, the Heavens opened up literally, with a heavy downpour of rains coupled with warning lightning and thunder. In the words of a nearby hawking woman returning from her day’s activity, “e good as rain fall! God no want make dem fight again. God no want make Nigeria fight war again!” Those words, in deed, gave me the realization that a fragile truce had been established between both parties, by the heavens above!