The opposition National Democratic Congress (NDC) is accusing the governing New Patriotic Party (NPP) of planning to stuff thumb-printed ballot papers in some regions and turning round to blame it on them.

According to the NDC, information they have gathered indicates that the plot is to be executed in the Ashanti, Volta, Northern, Upper East, and Upper West Regions.

The NDC insists the “NPP has hired people whose arrest they will stage in some hotels in the regions mentioned above. The so-called culprits will then confess to the police that they were hired by some NDC executives.”

The party disclosed that it uncovered the ploy through its intelligence gathering and preparedness for the 2020 polls.

“The National Democratic Congress has uncovered a sinister agenda by the New Patriotic Party to stuff ballot boxes with thumb printed ballot papers in the Ashanti, Volta, Northern, Upper East and Upper West Regions and blame it on the NDC,” it said in a brief statement.

The NDC’s Director of Elections, Elvis Afriyie Ankrah warned persons involved in such a plot to immediately repent of that thought.

He said the party will address a press conference ahead of the elections to give details about the alleged plot.

Below is the press statement from NDC 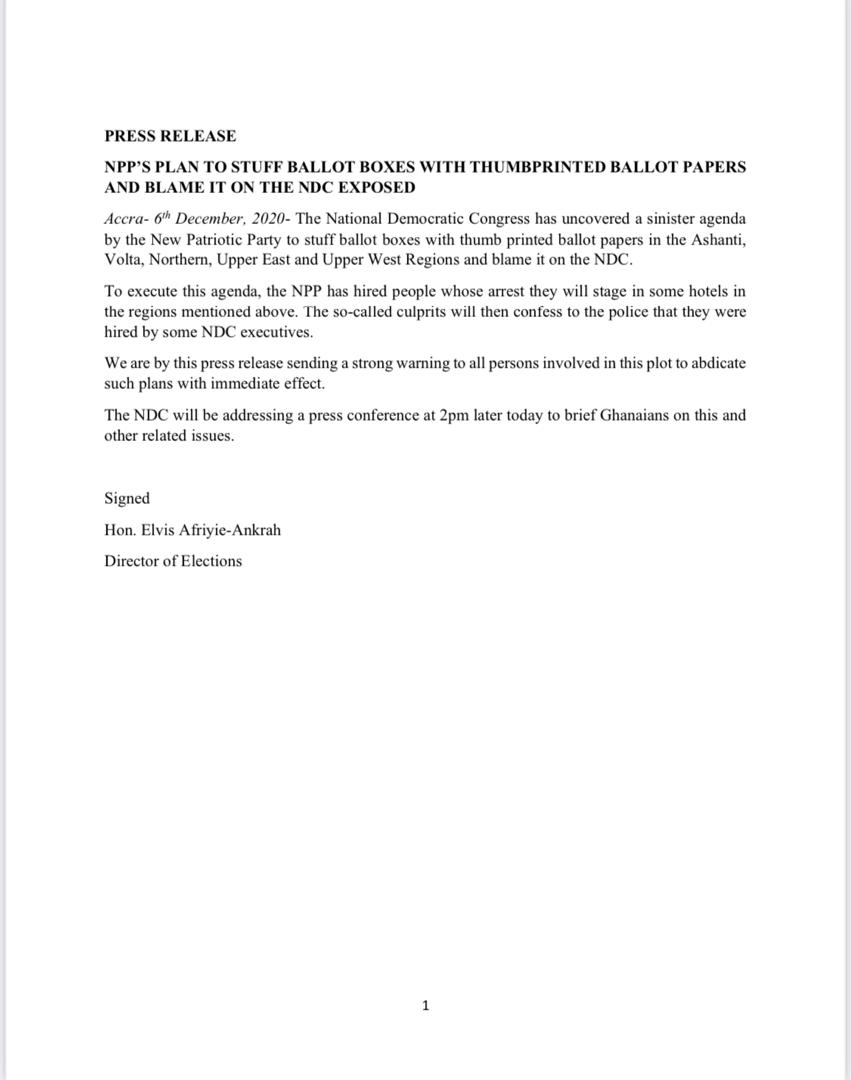 This will not be the first time such an allegations has been ahead of a general elections in Ghana.

The incident of already thumb-printed ballot papers being supposedly kept by some persons with the intention of perpetrating voter fraud in particular is not new to Ghana’s politics.

In 2016, Police in the Ashanti Region retrieved some of thumb-printed ballot papers from some persons at a hotel in Kumasi.

Reports say the police acted upon a tip-off by the NPP Regional Chairman, Bernard Antwi Boasiako, popularly known as Chairman Wontumi to apprehend the suspects believed to be supporters of the NDC.

The NDC however denied any connection to the incident, accusing Chairman Wontumi and the NPP of planting the ballot papers themselves and acting everything to create the impression as though the NDC was involved in plans to rig the elections.