Samuel Koku Anyidoho former deputy secretary of the biggest opposition party NDC seems not to be cool with some of his party leaders after his dismissal from the party.

Mr. Anyidoho was sacked from the NDC party after violating the party rules and regulations.

The founder and CEO of Atta Mills institute made a post on his Twitter page recounting on issues affecting the NDC party,he wrote”The NDC Is not a banana political party,is just as Ghana is not a banana republic!  both entities are gorvened by accepted norms and enshrined in constitutions .The day both entities throw out the Constitution; that is when the banana syndrome will kick-in .Good morning,by Koku Anyidoho on his Twitter page. 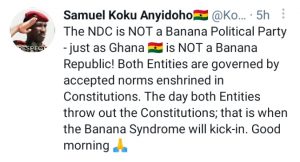