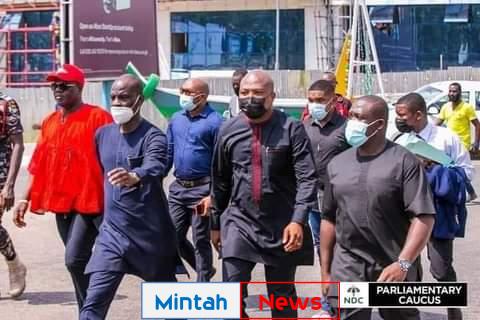 An Accra Circuit Court on Monday adjourned the matter involving 20 minority Members of Parliament, who allegedly failed to notify the Police before holding a special event.

They were charged with unlawful assembly contrary to section 202 of the Criminal Offences Act and sections 1, 2 and 9 of the Public Order Act.

Meanwhile, the Deputy General Secretary of the party, Peter Boamah Otokunor, is also charged with the same offence.

When the case was called in court on Monday, January 4, 2021 the MPs were not in court.

The Court presided over by Madam Priscilla Mireku, then adjourned the matter to January 19, 2021.

On 22/12/2020, at about 10:30 am, the accused persons whose intention was not known, suddenly started marching from the Parliament House to the office of the Electoral Commission.

He said the Accra Regional Police Command was informed in view of the recent series of demonstration been organized by the party against the declaration of the 2020 General Election results which they believe was rigged in favour of the sitting President. The police were deployed to access the situation.

The Prosecution said the leadership of the Parliamentarians led by the Mr Iddrisu, who is the Minority leader in Parliament, and other Parliamentary leaders of the opposition, told the Police that they were marching to present a petition to the Chairperson of the Electoral Commission.

He said the Police reminded them that their actions was a breach of law and advised to resort to the dictates of the Public Order Act.

“They were however overpowered and dispersed,” he said.

The Biography of ‘The Law’ Lawyer Tsatsu Tsikata