NDC to address the media over Hawa Koomson ‘thuggery’ 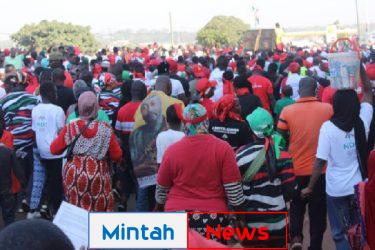 The National Democratic Congress (NDC) in Awutu Senya East has hinted at addressing the media over the shooting incident on its Parliamentary candidate on Election Day.

The convoy in which Naa Koryoo was in on Monday suffered gunshots alleged to have been masterminded by hoodlums of incumbent NPP MP Hawa Koomson, where three people are reported to have suffered some degrees of injuries.

The NDC, in order to give their side of the story, says it is going to address the media in a bit so as to rectify some issues going on.

Below is the statement

Some thugs in a Rambo style shot into this car which had just moved from Naa Koryoo, the NDC Parliamentary candidate’s House in Kasoa. Three NDC Branch executives were shot in the car and one is in critical condition. There are some police personnel at the scene taking fingerprints on the car.

We just left the crime scene to the polling station where Naa Koryoo is supposed to vote and there is still a long queue and people are determined to cast their ballot. Apparently, Naa Koryoo was the target but she was not in the car when the shooting happened. We have been informed by one of the constituency executives that there will be a press conference shortly.

No amount of thuggery, violence or intimidation shall stop the people’s resolve to kick out Akuffo-Addo and his violent party out of power.

BREAKING: Policeman dies while on election duties at Ahafo Region