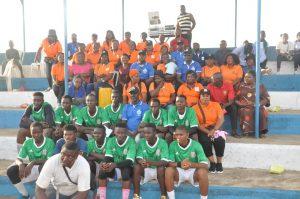 Nimrod expressed this while speaking at the opening ceremony of the First Inter Barracks Volleyball Championship at the Ribadu Cantonment in Kaduna on Thursday.

“The GOC was so happy to approve the renovation of this court,” he said.

Speaking further, he said that he renovated the courts as part of his contributions towards giving back to the barrack community which impacted on him and contributed to making him successful.

“Today marks 50 years that I started playing volleyball on this court.

“I believe if I spent five decades and come back to do what I am doing, it means I was not stubborn. Even in my village today, I have a volleyball court. We were the pioneers of this barracks.

“If I was stubborn, today I won’t be President of NVBF. So for other barracks boys and girls, when God lifts you up, come and assist the barracks.

“No barrack children are stubborn. They are matured and well behaved. They have made impact in several endeavours. Some are doctors, engineers and even generals in the military,” he said.

He said that the former GOC did a good job in renovating blocks at the barracks, which is one of the things that prompted him to renovating the Volleyball Courts.

Speaking on the inter Barracks Volleyball championship, he was optimistic that next year’s edition would feature more teams.

“We would have wished Kachia and Zaria barracks are in this championship but I have assurances that next phase they will be here,” he said.

He urged the players to love one another, share ideas and see how they can grow in their respective fields.

“If I didn’t go to school, I won’t be where I am today. I urge you to support yourselves and excel in various endeavours,” he added.

He thanked all the dignitaries and spectators that graced the opening ceremony, while calling on more sports lovers to attend the closing ceremony.

“Saturday is closing ceremony. I want to thank everyone. On Saturday, come here in large numbers to witness the final,” he said.

My Boyfriend Should Be Able To Give Me GHC10,000 As monthly Allowance – Bella of Date Rush [Video]