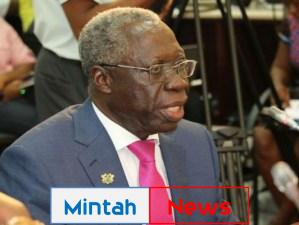 Professor David Abdulai, Senior Advisor at the African Parliamentary Network, has noted that the role of Mr Yaw Osafo-Maafo as Senior Minister was not properly defined.

This, he said, may have resulted in Mr Osafo-Maafo engaging in actions that may have caused a lot of problems for President Nana Addo Dankwa Akufo-Addo’s first administration.

Contributing to a discussion on TV3’s Key Points, Professor Abdullai said reports claiming that the senior minister has resigned from his post is a welcoming news because that makes it easier for the President as he contemplates the officials who will join his cabinet.

He told host Abena Tabi that “When it comes to Mr Osafo-Maafo, the first thing that came to mind when I heard the position was the whole notion of the late Lee Kuan Yew of Singapore , the Prime Minister of Singapore, then he became the Senior Minister and later on Minister Mentor

“The first question I asked myself was what is the role of a senior minister in Ghana? I think without the definition of the specific role he had to play it became very difficult and that is where you had the challenge of he probably engaging in things that caused a lot of problems for the government.

“However, I read somewhere that he said he is retiring from politics, if it is true then he has made it very easy for the president in his choice of him as a cabinet minister.”

For his part, Pollster and Managing Editor of the Dispatch, Mr Ben Epshon, said he is reliably informed that Mr Osafo-Maafo has resigned from his position.

He said also told host Abena that his resignation makes it easier for the President to take a decision on whether or not keep him in office.

Mr Ephson said that there was a perception among the general public that Mr Osafo-Maafo interfered with the efforts of the President to fight corruption.

The public, he said, believed that he was the brain behind the decision to ask the Auditor General Daniel Domelevo to proceed on leave.

This situation, he said cost President Akufo-Addo some votes in the 2020 general elections.

He explained that the president’s decision to ask Mr Domelevo to proceed on leave raised deep concerns about his willingness to fight graft especially when the Auditor General was tackling some corruption-related issues at the time he was asked to go home and rest.

“This is the president’s last term, and the NPP has a history of always tearing apart when it comes to selecting flagbearer.

“Presidents in their first term turn to be careful because they will need some of the people along the line for their second term,” he said.

“With regards to Osafo-Maafo, I think that he has made it easier for the President, I am reliably informed that he has tended in his resignation.

“With him, there have been a few issues which have played out in the media. I think that people think that Mr Domelevo being asked to go on leave arose from some of the things that he did.”

Mr Ephson further stated that the President is going to have lot of tricky issues in his second term.

He added “In his last term the president is going to have a few tricky issues. He gives assignment at cabinet level and he will be the best person to judge. For us in the media we will discuss it.

“And so I think for Mr Osafo-Maafo his resignation may make it a bit easier for the president to ask him to leave.”