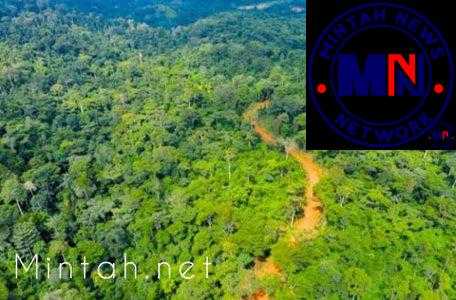 The areas located in the Upper East and West Regions are being raided by illegal miners although the communities resisted mining applications in the past.

Disturbed and appalled by the activities of the ‘galamseyers’, the Paramount Chiefs of Banu, Kayoro, Katiu, and Nakong traditional areas together with their elders and people have decided that they will not sit idle.

They have hence through a letter copied to the Regional Ministers of the affected communities called for action to end the menace that have led to the destruction of the reserved forest and the many wildlife in it.

The Paramount Chiefs stress that huge investments by local and international partners like USAID, International Union of Conservation (UC), the World Bank, Forestry Commission of Ghana, and Global Environment Facility (GEF) must not be allowed to go in vain because of the activities of illegal miners.

Bride Thrills Husband At Wedding; Strips Gown To Twerk For…

“We are, therefore, by this letter demanding from the Sissala East Municipality, and the Upper West Regional Minister, the Kasena Nankana West District Assembly, and the Upper East Regional Minister to as a matter of urgency send a military task force to the area to remove the illegal miners,” a letter signed by Frank K. Pwamebam who is secretary for Sanyiga Kasena Gavara Kara has said.

Find below a copy of the letter to the Regional Ministers and relevant stakeholders: 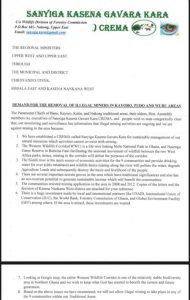 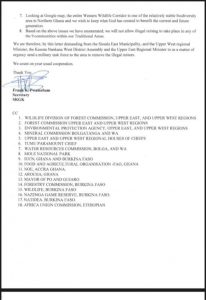 Bride Thrills Husband At Wedding; Strips Gown To Twerk For Her Groom [Watch]