Revenue Collection “Demons and Principalities” will be Eliminated – Bawumia

Vice President of the Republic, Dr. Mahamudu Bawumia says with the coming into being of the single platform for all Government of Ghana (GoG) services, (Ghana.Gov dashboard), persons responsible for revenue leakages, he described as public sector “demons and principalities” will be eliminated.

Addressing financial sector players and other attendees at a ceremony to officially launch the single platform for all Government of Ghana services (www.ghana.gov.gh) at the Banquet Hall of the Jubilee House today the 14th of July 2021, Vice President Mahamudu Bawumia said the new services and payments platform will go a long way to boost the country’s revenue collection drive up to about three billion Ghana cedis (GHc3,000,000,000.00), thereby doing away with public sector workers responsible for massive revenue leakages in the country’s tax architecture.

It is a real weapon in the fight against demons and principalities in the public sector. Instead of those who demand public services handing cash over to administrative staff, they will switch to a mobile payment system. Transactions will be recorded instantly, avoiding any bribery and corruption regarding the quoted service fee, and curtailing the risk of embezzlement – Vice President Bawumia added.

Finance Minister, Ken Ofori-Atta in his brief remarks noted that the new Ghana.Gov platform will be deployed to cover all state institutions to ensure that government can secure all its revenue generation avenues.

Revenue collection according to the Minister for Finance, is expected to receive a big boost with the coming into force of the single platform for all Government of Ghana services.

The Finance Minister in his address also indicated that his office has done some analysis on regional basis when it comes to the payment of taxes and the Greater Accra Region is responsible for 80% of the total tax revenue of the state with Western Region contributing 8% and the Ashanti Region which is the second biggest region in the country in terms of economic activity, contributing just 7%. The Eastern Region the Minister says, also contributes just 6% of the nation’s total tax revenue.

He noted that while it is surprising that the Ashanti Region and the Eastern Region contribute 7% and 6% respectively, it is hoped that the new services and payment platform will help shore-up tax revenue in the low performing regions in the country. 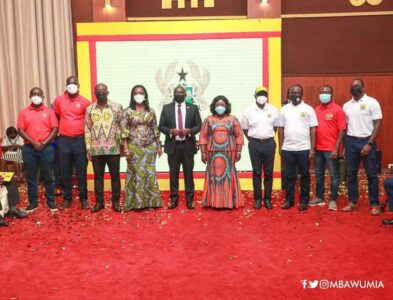 The Government of Ghana’s domestic revenue mostly constitutes tax/non-tax revenue and MMDA collections. According to the 2017 Auditor-General’s report, inefficiencies in revenue collection resulted in losses of over GHS2 billion. With only about 254 MMDAs and some 127 public organizations operating more than 2,000 physical points of services with mostly manual processes, revenue collection is bound to have challenges.

Modern technologies presents a simple, proven solution to address these challenges and significantly grow revenues. The Ghana.gov.gh website is designed to enhance revenue mobilization of the state. Over all, promoters of the all-inclusive dashboard are hopeful that six (6) benefits will be derived from the coming onboard of the Ghana.gov.

First, it is expected that the platform will help increase revenue collection as a result of the impact of electronic payment on the systemic collection losses that are prevalent today. It is estimated that about 10-15% of GoG collections are lost through theft, fraud and other schemes. Digitizing collections will therefore enable the government to improve their revenue by an estimated three billion Cedis (GHS 3 billion)

Secondly, digitizing government services will afford government savings not only directly from the reduction in direct input costs that will be saved from the digitizing activities (such as printing costs, transportation etc), but also from an increase in productivity. This latter savings will allow government to deliver more value from the same labour force currently employed. It is anticipated that the country will derive expense savings of approximately forty million Cedis (GHS 40 million) a year as a result of this platform.

The third target is reduced government borrowing. Currently government receives funds collected by various parties between 2 and 4 days from collecting agents. There are cases however where funds were not remitted for over 6 months.

Ghana.gov, however, will ensure that funds are received by GoG the next business day after collection. In addition, Ghana.gov will enable pre-payment of the government collections by parties who want to collect the funds. This innovation will provide extra liquidity to the government and essentially reduce the borrowing needs of the Government thereby saving the interest expense that would otherwise have been incurred.

Fourthly, boosting Ghana’s country profile is expected to be the next benefit of the new platform. Simplifying services and access to government services and increasing transparency of service delivery should have a positive impact on the ease of doing business rankings of the country and ultimately, foreign direct investments.

Countries such as Rwanda, Estonia, and the UK have all seen significant uplift in the investments as a result of their efforts to digitize and adopt a more cashless stance. By aggressively pursuing a cash-lite agenda, Ghana will become a clear example for other African countries to emulate.

Employment & local capacity building is the fifth benefit of the platform. The Ghana.gov project will create a large number of high skilled technology jobs in other areas. It is important to note that a number of these jobs will have no direct cost to government as they will be within the private sector. This will also help improve the capacity of Ghanaian firms. It is estimated that the full roll out of digital government services in conjunction with Ghana.gov, will ultimately involve over one hundred companies and creation of over 1000 jobs. The rollout of Ghana.gov will also see the establishment of government resource centers, run by small scale entrepreneurs, who will not only assist the general public access government services, but also help in the efforts and activities of GoG to widen the tax net by engaging directly with the informal sector.

Lastly, the growing of export revenues is also a major target of the project. Ultimately, Ghana.gov which is made in Ghana by Ghanaians, will also be an export product opportunity. Successful deployment of the Ghana.gov platform will provide an opportunity for the service to be resold to other governments in Africa and beyond who are also looking to implement a cash-lite and digitization strategy. Revenue from the platform used in other countries will be remitted back to Ghana and the government will earn both foreign exchange and tax revenue as a result.

By Wilberforce A. Asare

NIGERIA Election 2023: Call for power shift by Southern governors may lead to break up – Presidential Support