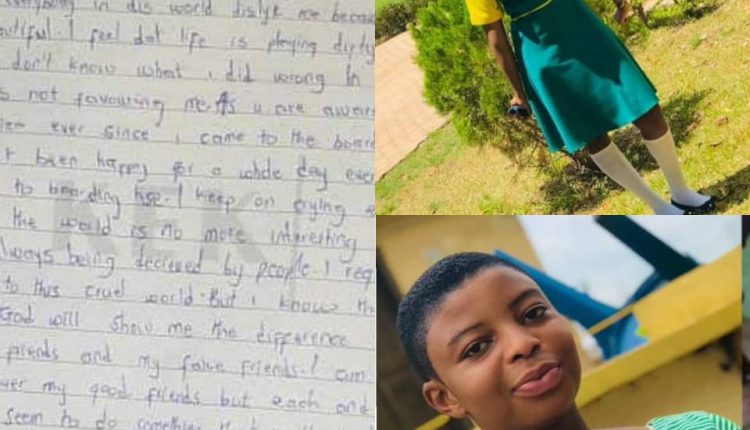 Leticia Kyere Pinaman, a former JSS student of Miracle Junior High School, has been trending after the news of her allegedly taking her own life spread like wildfire.

The 14-year-old girl was reportedly found by a student hanging in the school dining hall.

At that point, it was reported that a note was found with the simple words: “There is so much pain in my heart”.

However, in a post sighted online, a full note allegedly written by Leticia before she died has been retrieved.

The content has it that she has been neglected by people she called friends and those she expected to love her more.

According to the note, Leticia’s friends only come around when she has food in her chop box and that made her unhappy.

The note also reads that Leticia had not been happy ever since enrolling in the boarding house because her days were full of sadness.

It reads further that life was being unfair to her and she feels her destiny is not a pleasant thing.

According to the note, Leticia has no one to share her problems with, not even at home, making her feel lonely most of the time.

She allegedly wrote in the note that she was aware the news of her death was going to sadden her friends but she had no option.

Read the full note below

Stonebwoy Speaks About Kelvyn Boy In Latest Interview, See What He Said About Him [Video]