Argentine forward, Sergio Kun Aguero will depart from Manchester City after spending 10 seasons at the Etihad Stadium at the end of the season.

Manchester City are planning to build a statue for the 32-year old striker who went on to become the club’s all time goalscorer.

Sergio Aguero joined Man City from Aletico Madrid in 2011 and he has bagged 257 goals in 384 games since, making him their record goalscorer.

In a three paragraph Facebook post, Kun Aguero said he feels satisfied and pride to have played for the Cities for 10 years. 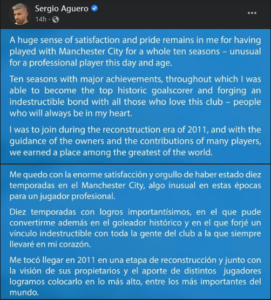 Meanwhile, Manchester City Chairman, Khaldoon Al Mubarak said the Argentine’s contribution for the club’s success in past 10 years can not be overstated.

“Sergio’s contribution to Manchester City over lest 10 years cannot be overstated.”

“This is not yet the moment for farewell words and speeches.There is still much to achieve”

“In the meantime,it gives me great pleasure to announce that we will be commissioning an artist to create a statue of Sergio to live at the Etihad Stadium” He said.

Aside the plans to build a statue for Aguero, Man City are also planning a farewell party for him which will happen on last day of their Premier League game at Etihad.

Man City are also hoping to get some fans into the stadium to bid farewell to their departing hero and club legend.

Medikal And Fella: Social Media Users Confused As They Find It Difficult To Tell Who Island Frimpong Resembles [Video]