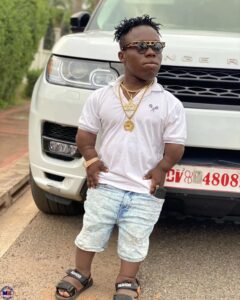 Family of the 15-year-old girl said to have been defiled in Bole by social media celebrity Shatta Bundle is accusing him again of luring her to be featured in a music video.

Supposed uncle of the girl posted on Facebook that Tamale-based Shatta Bundle “is still keen in using the innocent 15 year old SHS1 student for his publicity stunts”.

“Shatta Bundle reportedly charged a popular musician in Accra GHc 8,000 with accommodation, food and aeroplane tickets from Tamale to Accra excluded, to feature in the musicians music video alongside the innocent 15-year-old,” the uncle, Haruna Mahama, wrote on Saturday, April 10.

According to the reports, Shatta Bundle has promised the girl GH¢3,000 as her share of the deal.

“Is Shatta Bundle sure he will get the beautiful little girl to Accra for this escapade? How big is GHc3,000 for him to be struggling to get access to Aisha again?” the uncle asked, proving Shatta Bundle will not succeed in this move.

He has since chosen to keep his intention to sue the socialite private. 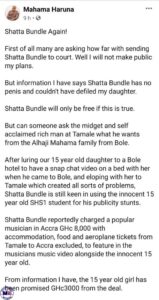