It appears the One corner hitmaker is not cool after Amerado shades him in a diss song he replied to Obibini titled ‘ The throne’.

After Amerado  drop the track ( The throne ), Patapa retweet and said it will take Amerado 10years to get what he has now (hit song).

And the was no doubt that the to known of Patapa is because of his major hit song ( one corner) which made waves accros the country.

Patapa again has taken to his Twitter account shading Amerado as Corona Virus and lockdown artist.And he has also advice the yentesem hitmaker to be humble and focus on his music career. 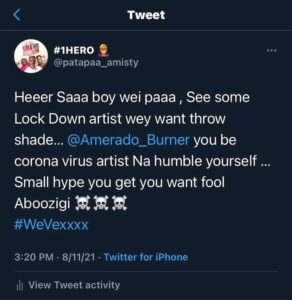