The US military has temporarily suspended air operations at Kabul airport while US troops try to clear Afghans who have flooded onto the airfield in a desperate rush to escape the talibans US defense official told CNN.

The suspension comes amid reports of chaos at the airport, where the US has moved all its embassy personnel. Some Afghans have reportedly rushed departing planes, making frantic attempts to scramble onto and then cling to the aircraft as they took off. Gunfire has been reportedly heard around the airport as well. CNN has not been able to independently confirm these reports, but the military is now moving to clear and secure the runways.
The suspension is in effect “while we make sure the airfield is secure,” the US defense official told CNN.
The upheaval at the airport underscores the turmoil and confusion that has marked the sudden US exit from Afghanistan. Amid the reports of airport unrest and a sudden US decision Sunday to rush an additional 1,000 troops to Kabul, the leading US military commander in the Middle East met with Taliban officials to underscore that the sole US mission was to evacuate people safely. Biden administration officials continued to insist the US has the ability to stabilize the situation. 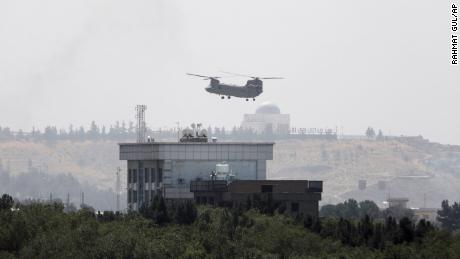 “The United States has the forces that are necessary to bring stability and security to that airport,” deputy national security adviser Jon Finer told CNN’s Brianna Keilar on “New Day.”
“I think they have gone a great distance towards doing that since some of those images have aired,” Finer said of scenes of mayhem at the airport.
“There are going to be more forces flowing in throughout the course of today and tomorrow, and we believe we have what’s necessary to be able to enable these flights to continue as soon as possible,” Finer said.
Gen. Frank McKenzie, the commander of US CENTCOM, met with Taliban leaders in Doha, Qatar, on Sunday to underscore that the sole US mission was to get people out safely, the defense official said.
Finer said the US also issued a warning, making clear to the Taliban “in no uncertain terms” not to interfere with Afghans who are attempting to get to the Kabul airport for potential evacuation. But Finer also added that those Afghans should wait until they are told it is time for their evacuation before going to the airport.
“We are asking people, in an orderly way, when their flight is called,” Finer said. “And again, this is not going to be just a free-for-all. It can’t be, for security reasons… When people’s flights are timed, we are asking them to show up at the airport to be present to get on those flights. Not just whoever happens to come to the airport,” Finer said.

The US airlifted about 500 embassy staff out of Afghanistan on Monday, leaving about another 3,500 employees — US citizens and Afghans — waiting for evacuation at the airport, a defense official told CNN Sunday.
As the Biden administration prioritizes the evacuation of American personnel from the country, they curtailed the number of government-sponsored evacuation flights to the United States for Afghans who worked alongside the US for the time being, three sources familiar with the situation told CNN Sunday.
Late Sunday, the Defense Department and State Department announced US forces were taking over air traffic control at Kabul airport. The joint statement also confirmed that the US will expand troop presence at the Kabul airport to nearly 6,000 troops over the next 48 hours as part of “a series of steps to secure the Hamid Karzai International Airport to enable the safe departure of U.S. and allied personnel from Afghanistan via civilian and military flights.”
“Tomorrow and over the coming days, we will be transferring out of the country thousands of American citizens who have been resident in Afghanistan, as well as locally employed staff of the U.S. mission in Kabul and their families and other particularly vulnerable Afghan nationals,” the joint statement said.
“And we will accelerate the evacuation of thousands of Afghans eligible for U.S. Special Immigrant Visas, nearly 2,000 of whom have already arrived in the United States over the past two weeks,” the statement said. “For all categories, Afghans who have cleared security screening will continue to be transferred directly to the United States. And we will find additional locations for those yet to be screened.”
A defense official told CNN the 6,000 US troops earmarked for security duty in Kabul will now have the task of securing the entire perimeter of the airport. Airborne sensors could also be used to ensure perimeter security, the official said. The concern is not just because of the hundreds of Afghans rushing on to the airfield to try to get flights out, but because of the potential for Taliban attacks, the official said.
The official said the continued evacuation flights must happen in a secure atmosphere. The original evacuation plan that called for 3,000 troops was essentially the baseline security plan that assumed a safe environment, the official said. With the havoc in the city and at the airport, the Pentagon had to double that to 6,000 as the security situation escalated.
The official said that US forces could wind up staying “as long as needed” to get Americans and Afghans out, but that the way ahead remains uncertain.

CNN’s Oren Lieberman and Kylie Atwood contributed to this report and Edited by Ewereko Botwey.