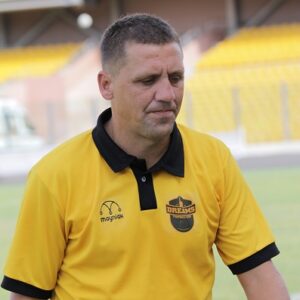 Head coach of Dreams Football Club, Vladislav Viric, has fired a warning to Accra Hearts of Oak ahead of their clash, stating he would see the back of the Phobians in their league clash on Sunday.

The “Still Believe” boys host Samuel Boadu’s side at the Theatre of Dreams in Dawu, and he believes the Phobians would not survive like they did in Aiyinase against Karela United.

Speaking at the post match presser after guiding his side to hold Legon Cities to a 1-1 draw, Viric declared “war” on the Phobians, stating that they will fall in Dawu come Sunday.

“We are going to beat Hearts of Oak; that is the approach we will be taking into that game on Sunday.”

According to him, they need to better their lot on the log and one sure way to do it is to make their home a fortress and that is exactly the mentality he is trying to imbibe into the players and come Sunday it will be demonstrated for all to see.

“We are currently sixth on the league table. There are clubs behind us who are aiming to climb above us, and we need to stop that and one sure way to do so is to keep winning.”

The Serbian gaffer noted that he came into the Legon Cities game with the hope of taking all the points available, but injuries and lack of purposefulness on the part of his strikers upfront robbed him of a win.

“Our first half was terrible; we had chances to win the game, but we failed to make it count. We have been rocked by injuries and even today we had injured players coming to just sit on the bench for us to get the numbers.

”We have some days to prepare for the Hearts game and I hope by then I would have my injured players back, and we will plot the fall of the Rainbow boys,” he said.

“We have what it takes to beat them, and we will win over them.”

Viric, who was adjudged the NASCO coach of the Month for February after guiding them to a chain of successive wins in the month under review, has had a hectic start to the second round of the campaign, drawing 1-1 with Inter Allies, losing 2-0 to Medeama SC and beating Karela United 1-0