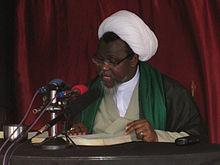 It is necessary to speak to those making up lies to justify the past of the Communication Minister Dr Isah Pantami while also supporting government’s double standard. Despite his past dangerous utterances Dr Pantami is backed by the Nigerian government while Sheikh Ibraheem Zakzaky whose suppression was condemned by the Federal High Court is still kept in illegal detention.

Already, there are audio and video clips of all the things he is being accused of doing the round on social media, he himself didn’t deny uttering, the Nigerian government didn’t also deny that he uttered them. They only said he did them while he was young and less informed. And that today he has reverted from abetting terrorism, promoting interdenominational hate speeches among Muslims and being active in promoting religious disharmony between Muslims and Christians. Both himself and the government have not denied it. They only confirmed that he has now changed.

Hence, people cannot be constructing lies and putting make ups on English to deny what both what the Minister himself and the government have confirmed. If it is not true, the presidential statement declaring government support for him will not confirm it. There is no point going about telling lies and dressing up the utterances Dr Pantami had committed in the past. He said them and he did them, but now regrets.

If he, or the government have denied all these from the beginning then the suggestions his defenders are raising would be tenable and justifiable.

I think they should rather concentrate on trying to convince people that he is truly a changed person now and people should view him as such. But the more they try to deny or dress those things up with cosmetics they expose him the more.

More so, this puts the government’s morality more at stake and in question by placing itself on a double standard thereby prompting injustice among citizens and hatching more enemies for the government.

On the other hand, we can all recall that with mischief and hypocrisy, Sheikh Ibraheem Zakzaky leader of the Islamic Movement in Nigeria, otherwise called Shi’a was attacked without any justifiable reason. It was later made up that his followers blocked the way for the Army Chief, Lt Gen Tukur Buratai to justify why hisen spent three days murdering the Shi’as.

Because of this, without arresting and prosecuting those who actually blocked his way, the army clampdown on the Shi’a for three consecutive days killing innocent and unarmed men, women and children who have come to celebrate the commencement of the birth Month of Prophet Muhammad SAWA in their religious centre in Zaria in December 2015, the army engaged in a killing spree and even burned people alive, as they chanted “No More Shi’a”. They killed unarmed citizens just because of their faith. As if that was not brutal enough, the army also invited touts and rogues to scavenge the dead bodies and steal their personal possessions that included rings, pocket money and female jeweleries.

They burned down the Sheikh’s residence and later demolished and even packed the rubbles away. The Sheikh was abducted and taken to Abuja and held in illegal detention since then even as he was shot at in the eye and limb. Three of his sons were shot dead in his presence while his wife was also shot in the tommy.

The Movement took the case before the Nigerian court in Abuja, the Federal High Court, a court of competent jurisdiction in Nigeria and the government was condemned for this act and ordered to pay the Sheikh damages of N50 million, to build a new house for him and that he be released immediately. The government refused to obey this court order and acted in contempt of court. It is now the sixth year and there is no sign of justice for Sheikh Zakzaky from the Nigerian government.

The Judicial Commission of Inquiry, JCI set up by the Kaduna state governor Nasiru Elrufai to investigate the Zaria massacre accused the Nigerian army of acting beyond their rules of engagement, condemned the government for violating the Geneva Convention and burying 347 of the victims in a mass grave, all of which were not reflected in the white paper issued by the state governor who banned the Islamic Movement calling it an “unlawful society”.

This is the government fighting an individual for no just cause but because he does not share the same religious views with them and defending another individual for what he had actually committed that have contributed in setting the country on fire.

Unless the government becomes fair and just and obeys the court’s judgement and release Sheikh Ibraheem Zakzaky, then there is no morality in backing and defending Pantami after both the government and Pantami have confirmed he is guilty of the negative utterances that have contributed in setting Nigeria on fire today. The government should therefore hasten to release Sheikh Zakzaky who has always been know to be a peace advocate.