Forbes Magazine, a global media company, which focuses on business, investment, technology, entrepreneurship, leadership, and lifestyle, says President Akufo-Addo’s selection as the ‘African of the Year‘ was motivated by the policies he has introduced in Ghana since he assumed office as President of the Republic.

Executive Director for Forbes Magazine, West Africa, Frederic Van de vyver, in a brief presentation call on the President at the Jubilee House today Thursday the 9th of December 2021, noted that Forbes Magazine’s choice was not difficult this year because President Akufo-Addo has distinguished himself, particularly, through his handling of the COVID-19 pandemic and his successful bid to have Ghana as the host country for the Africa Continental Free Trade Area (AfCFTA) secretariat.

Just to mention a few in a nutshell, Ghana Beyond Aid…how to develop Ghana with its own raw materials, adding value to industry, etc.). So many other policies like the ‘Year of Return’, ‘Agenda 111‘, ‘Free SHS’ and your entrepreneurial development drive,” Frederic Van de vyver said, “are among some of the policies that influenced the Forbes Magazine choice.

President Akufo-Addo in his acceptance speech said he is excited that his choice by the Forbes Magazine is based on the work of his government and nothing else.

He indicated that he shares the award with all the men and women he works with in his government and with the people of Ghana at large.

I am looking upon this prize or this commendation as one for Ghana, one for my government and lastly for myself, – President Akufo-Addo said. 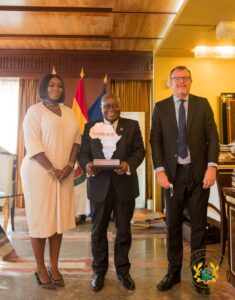 President Akufo-Addo was adjudged the African of the Year 2021 by Forbes Africa Magazine in its latest issue, unveiled on Friday 3 December 2021.

The award, which is in its fourth year, recognizes Africans who have made an impact on the continent and on the world stage.

The latest issue of the magazine said President Akufo-Addo has “repositioned the country in the global marketplace as one reliant on its own resources and strengths.”

In an interview with CNBC Africa after he was named African of the Year by the Forbes Magazine, President Akufo-Addo said he was overwhelmed by the recognition Forbes Africa has given him.

Thanks very much for recognising the work that we are doing here in Ghana,” he said. “For the African version of the magazine to pick me, I’m very grateful.

Akufo-Addo said the award “is an honour and it means the world is looking at the work we are doing here in Ghana. So it’s an inspiration for us and an encouragement for us to continue the path that we have set for ourselves.

By: Wilberforce A Asare

Saudi camel beauty contest disqualifies over 40 in crackdown on Botox